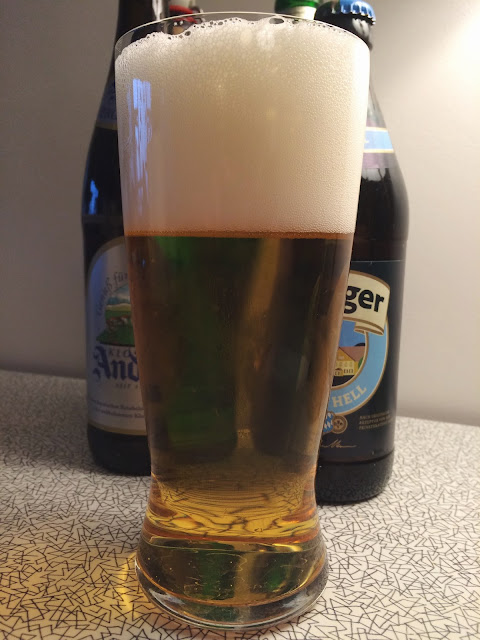 Recently, after enjoying a bottle of Hell from Bamberg’s Keesman brewery, I attempted to throw together some quick tasting notes for an Untappd check-in. Here’s what I eventually came up with;

I threw in the last sentence because I felt that those preceding it failed to a) communicate that I had actually very much enjoyed the beer, or b) make it sound like anything anybody would ever want to drink. Whilst these notes accurately represent my experience of drinking the Hell (I didn't claim to be tasting things I wasn't really tasting), the truth is I was desperately grasping for anything to usefully say about it. That doesn't mean it was boring or unremarkable – I'm just starting to realise that I have a hard time describing the experience of pale lager.

One reason for this might be that pale lager is pretty much my base point for what “beer” means. Since lager is the dominant beer in our culture, this is not unusual; a Google image search for the term ‘beer’ results in pages and pages of  images of foaming glasses of lager, sometimes joined by other glasses of varying ale-like colours but never absent. The first beers I ever tasted were lagers, and lager was almost all I drank between my teenage years and my early twenties.
The result of this is that lager is, often, “just lager”. In my discovery of good beer (revelatory pint of Camden Hells notwithstanding), it took a long time to separate good lager from bad, even if the contrast is night and day to me at this point. I would argue that the differences between macro fizz and properly brewed lager are far more subtle than between, say, Punk IPA and (what I then perceived to be) a boring cask bitter.

But then lager is subtle, even at its most sublime. And that’s definitely part of why I'm lost for words when it’s time to write about one – I recently had the same issue trying to write about mild, a similarly non-imposing style. The complexity of a barrel-aged imperial stout means that tasting notes write themselves. Drinking one, there’s so much going on that you hardly have time to jot down one thought before another hits you. Lager is comparatively simple – this is a large part of its appeal, but it doesn't make for great writing.

There are certain stock phrases and descriptors I keep going back to in my blundering attempts to describe the lager experience, of which crisp is probably the laziest. I know what I mean by it – a suggestion of freshness as well as refreshment, like biting into a juicy, crunchy apple. But in this context, the word has a whiff of corporate copy about it – words like ‘crisp’, ‘cool’ and ‘refreshing’ are often used in advertising macro lagers, presumably as they divert attention away from the lack of actual flavour in most of these products.

Similarly, I know what I mean when I say a lager is clean. A well-made lager given plenty of time to mature has a certain purity to it, and those brewed with less attention to quality don’t – they often have distracting notes of sweetcorn or cabbage, or are weirdly, synthetically sweet or metallic. But it doesn't apply to all great lagers; I love Pilsner Urquell, but it’s big ol’ scoop of diacetyl adds a complexity which, whilst it might not be exactly dirty, isn't clean either.

I mentioned biscuits in reference to the Keesman beer that prompted this post, and variations on biscuity seem to pop up often in tasting notes. There are probably more varieties of biscuits than there are styles of beer, making this about as useful a statement as ‘tastes like beer’. But it does, at least for me, mean something specific. Think of Maltesers. Now, ignore the chocolate (or imagine you've nibbled it off) and focus on the biscuit ball within. There is a specific malty tang within that biscuit that is exactly what I'm referring to when I say ‘biscuity’, and I find that particular flavour in a lot of lagers (obviously malt flavour is part of it, but there’s more to it than that). Until I can find a way to sum that up succinctly and pithily, lager will remain forever ‘biscuity’ for me.

So pale lager, much as I love it, probably won’t be inspiring any upcoming poetry collections.
Posted by Joe Tindall at 13:33