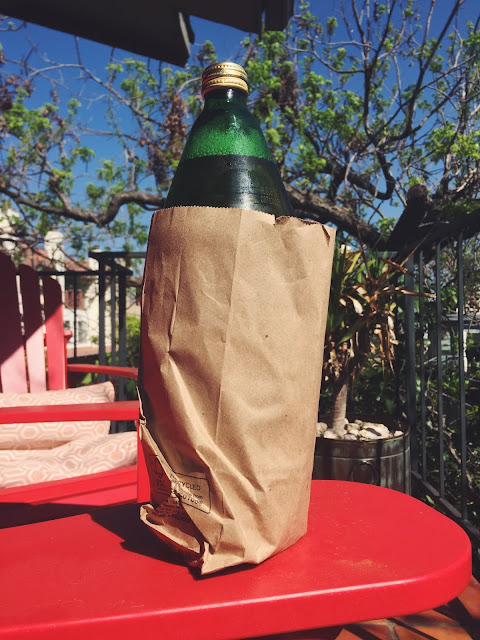 When my dad was a young boy, he’d see adverts in Marvel comics for something called Tootsie Rolls. These are small, chewy, toffee-like sweets, though he assumed from the pictures they were the size of a Mars bar. As I understand it, their appeal was as much to do with the exoticism of the all-American imagery in the adverts as it was their imagined flavour; “they were American sweets”, he told me, “so they would be better than ours.” Decades later, visiting the States for the first time, he bought a packet. And they were… OK.

In my (slightly older) youth, I too was strongly attracted to an American delicacy, though its image and reputation is quite different to the squeaky-clean Americana of a vintage Tootsie Roll ad. I longed to taste malt liquor.

This confusingly-named beverage is made of malt – cut with a fair dose of rice and/or corn - but isn’t really liquor; it’s beer. Alongside the adjuncts in the grist, it may also have enzymes added to encourage the yeast to break down the sugars in the ingredients, boosting its alcohol content significantly above the light lagers that otherwise dominate the market. And it’s cheap. Emerging in the 1950s, it was marketed initially towards affluent white people; one (surviving) brand was actually called Country Club.

According to David Infante’s excellent history of the style for Thrillist, malt liquor began to sell well in black neighbourhoods before companies began to consciously target this demographic. But target them they eventually did. From the mid-1970s onward, black celebrities such as Rufus Thomas and Red Foxx promoted various malt liquors.

In the 1980s, the 40z bottle was introduced (though nobody seems to know exactly why). As gangsta rap emerged at the end of that decade, 40s of malt liquor became ubiquitously associated with hip hop. St. Ides, a brand that came to public prominence at roughly the same time as NWA, capitalised on this, and extensively used rappers to promote the brand. The Portman group would be rightfully horrified by a 1993 ad, in which Ice Cube raps, “get your girl in the mood quicker / get your Jimmy thicker / with St. Ides malt liquor.”

Plenty of black folks objected to this kind of marketing. In John Singleton’s 1991 film Boyz n the Hood, Lawrence Fishbourne plays Jason ‘Furious’ Styles, father and mentor to Tre (Cuba Gooding Jr.) In one scene, the two take a trip to Compton, where Furious warns of the dangers of gentrification in black neighbourhoods. “Why is it that there’s a gun shop on almost every corner in this community?” he asks the gathering crowd. “Same reason there’s a liquor store on every corner in the black community. Why? They want us to kill ourselves. You go out to Beverly Hills, you don’t see that shit.” One onlooker challenges him, and Furious tries his best to press his point whilst, in an over-the-shoulder shot, we see the young man continuing to glug from his 40z of Olde English. 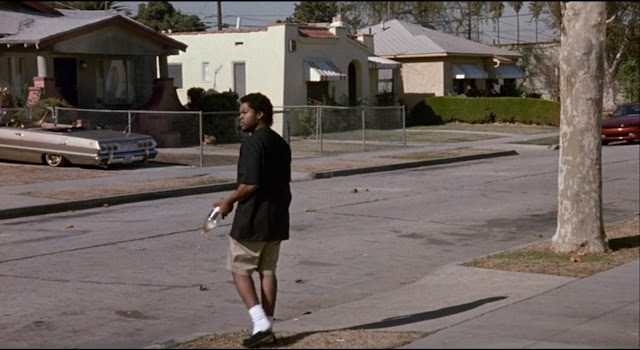 That Ice Cube could appear in both Boyz n the Hood and ads for St. Ides is something of a contradiction. In his role as Doughboy, a troubled young gang leader who fears for his life after murdering a rival, he provides the film’s thoughtful, painful conclusion. Reflecting on the cycle of violence he has found himself caught in, Doughboy’s final symbolic act is to pour away what remains of the bottle of malt liquor in his hand.

Furious in Boyz n the Hood speaks for many in black communities who were concerned about the negative influence of this potent brew on young people in their neighbourhoods. Their criticism damaged these beers’ reputations, and brands ceased advertising almost altogether. And, as hip hop entered a more luxurious fur-coats-and-diamonds phase, flashy champagne brands such as Cristal and Dom Pérignon took precedence as the rapper’s tipple of choice.

Why, though, did I want to try it? It’s unlikely to be good – beverages designed for maximum inebriation at minimum cost rarely are, because flavour is kind of surplus to their requirements. And anyway, malt liquor isn’t entirely unique – the likes of Special Brew or Super Tennents are pretty similar, but these brews don’t particularly call to me from the fridge of the local corner shop. But there is something quintessentially American about malt liquor; it’s big, brash, and in questionable taste. Its association with gangsta rap, and all the racial and economic inequalities that that implies, also suggests something of what makes America such a deeply troubling, fucked-up place.

On my recent visit to the US, I decided I wanted to finally satisfy my curiosity and track down a 40ozer. This was surprisingly difficult, but I did eventually suceed – a bottle of Mickey’s Fine Malt Liquor in a 7-Eleven in Austin, passed across the counter in the iconic brown paper bag. At 5.6% ABV, it’s not as strong as I expected, though there is some variation amongst malt liquors and some can top 10%. Owned by Miller, Mickey’s is apparently known for smaller bottles than mine; its 12oz packages are referred to as ‘grenades’ which they very, very faintly resemble. 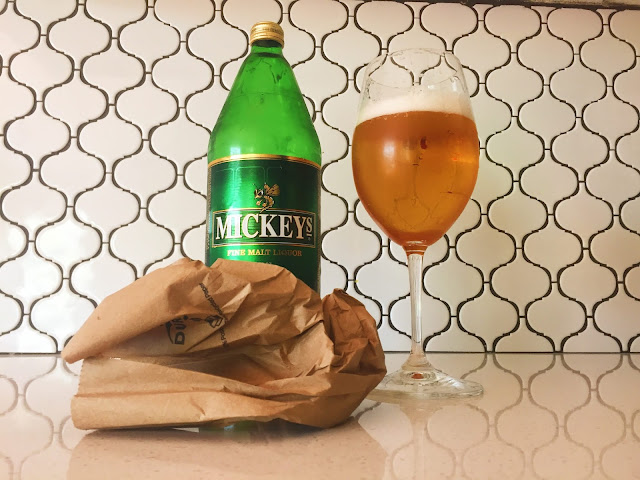 It looks like any other lager in the glass, and the aroma is pretty familiar. There’s a touch of honey on the nose, and you can tell just from a sniff that it will be sweet. My initial impression after a tentative first sip was relief; it’s nowhere near as bad as I feared. There’s a tiny touch of something that is recognisably malt, followed by dollops of sweet apple that recalls cheap cider almost as much as cheap beer, and a slightly oxidised, papery taste lingers in the background. Aside from being sweet (ever more so as you persevere with it), it legitimately tastes like sugar, and a sticky, syrupy mouthfeel emerges if it’s allowed to exceed ice-cold temperatures.

Whilst my dad might have been underwhelmed by his long-awaited packet of Tootsie Rolls, Mickey’s actually somewhat exceeds my expectations. But I’ve changed since I first daydreamed about slugging from a 40 at a crusty punk show in some imagined American basement. Mickey’s is theoretically surprisingly drinkable, but I didn’t drink very much of it – my teenage self would be disappointed to know that I left more than three quarters of the bottle. And absolutely horrified that I sipped it from a bougie wine glass.