The free state of Kemptown

The following is my contribution to The Session #133, hosted by Gareth at Barrel Aged Leeds. This month's theme is 'Hometown Glories'. 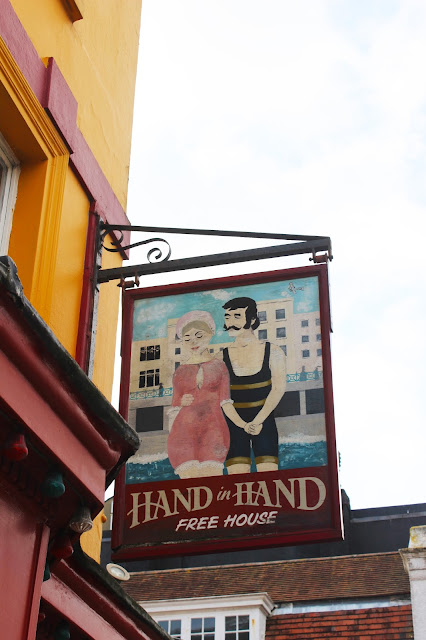 The year is 1989, and the Hand in Hand has no roof. Already 120-something years old, the pub is about to enter a new chapter; fermentation tanks are edging their way down into the cellar. The arrival of this kit marks the birth of the Hand in Hand as a brewpub.

Fast forward to 2017, and a fresh delivery of shiny stainless steel has arrived at the pub. Two new fermentation tanks are being lowered through a hole in the floor by the front door; leaving the roof intact, this time only floorboards are lifted. They’ll be returned and carpeted over again before the pub opens. Temperature controlled and able to contain the pressure demanded of beer destined for a keg, these tanks reflect the ambitions of Jack Tavaré, brewer at Hand Brew Co., the brand now operating out of the Hand.

Modern tanks aside, the basic brew kit is the same one that was installed those 28 years ago by then-landlord Bev Robbins, though the brews that comes out of it are very different. “The beers were awful apparently,” says Jack. “It was always the same base recipe and then when they were filling casks, the landlord just used to put different stuff in it to make it a different beer. I think there was one with… it wasn’t gravy brownings but it was something like that. Some kind of brown, food-based thing.” Another, dyed with red food colouring, was given the name Dragon’s Blood – an advertisement for it is still painted on the side of the building, but something tells me Jack won’t be reviving the recipe. 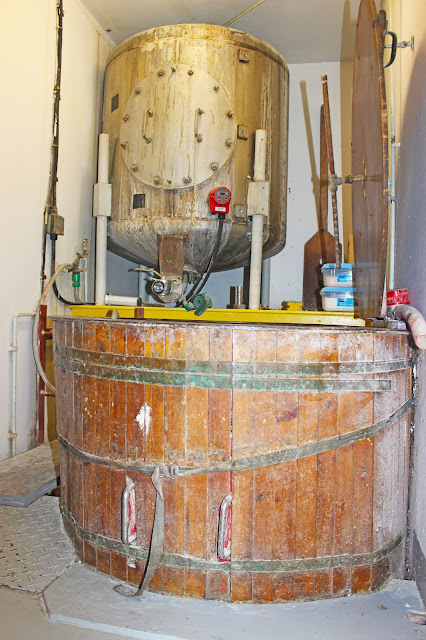 Crammed into a cramped, higgledy-piggledy space behind the scenes, the kit works on the principle of a traditional tower brewery. Rather than pumps, the flow process is propelled by gravity. The hot liquor tank and mash tun are on the second floor, and the wort flows down into the kettle on the level below. Once it’s boiled for an hour and hops are added, it’s transferred through a pipe, passing a heat exchanger on its way through the bar and into the fermenters in the cellar.

“We do actually use a couple of pumps now,” Jack laughs, “we’ve modernised”. He’s made small improvements here and there, like installing a manway on the kettle; previously, the only way to add hops was to drop them through a tiny hole which also released steam. “So far we don’t have a chimney,” he explains, “so when it’s boiling, steam just billows into this room. But that was the only hole I had, so when I was adding hops I had this steam blowing, hops going everywhere…”

Many of the old kit’s quirks remain, however, requiring some creative thinking. For example, Jack sets his hot liquor tank to around 92 degrees. “Normally you’d want your liquor around 77 degrees, depending on what you want your mash to be,” he tells me. “But below the element I get this pocket of cold liquor." Because the contents of the hot liquor tank can't be mixed, "I have to overheat the top part so that when that’s mixed with the bottom part and transferred into the mash tun, it will equal 77. You have to work around it.”

Hand Brew Co. has been the house brand since August 2016. Since the initial installation, the brewery has been almost constantly used, with only short spells of inactivity. Bev ran the pub with his wife Brenda until he passed away in 2006. He brewed under the brand Kemptown Brewery, reviving the name of a historic brewery that operated in this part of Brighton until the mid-1960s. “I think the way he got round it was by making ‘Kemptown Brewery Co. Est. 1989’ the full legal name,” Jack says. The kit was then used sporadically until it was taken over by Gary Sillence. He maintained the Kemptown name whilst using any spare capacity for his own brand, Brighton Bier, now a much larger operation based in a unit just down the road.

Around the time Gary left, the pub was taken on by its current owners, Jen and Clark, leaving the brewery temporarily empty with the intention of starting brewing again once they’d found their feet. Jack was then operating a small brewery, Beercraft, from a pilot kit at the Watchmaker’s Arms micropub in Hove, whilst working bar shifts at the Hand. “I was working behind the bar here and we got chatting about the brewery. I said “I think I should do it!””, Jack tells me. As Hand Brew Co. grew, he had less and less time to dedicate to Beercraft, and took the decision to merge the two companies. He hopes to move the small pilot kit up to Kemptown for trial recipes.

And the beers? Well, they’re excellent, reflecting an obviously meticulous attention to detail despite the equipment’s vagaries. I loved Hans, a clean and bitter pilsner. This gets the full lagering treatment, spending a generous eight weeks in the tanks, currently tying up a large percentage of the brewery’s capacity but absolutely worth it. Ayyyy, a US breakfast stout is just as impressive; brewed with lots of oats for a decadent creamy texture, its richness is rounded out by cocoa nibs and beans from Hove’s wonderful coffee roasters, Pharmacie. Aside from these, the current focus is on dry-hopped pale ales, though Jack has ambitions to move into Belgian styles. 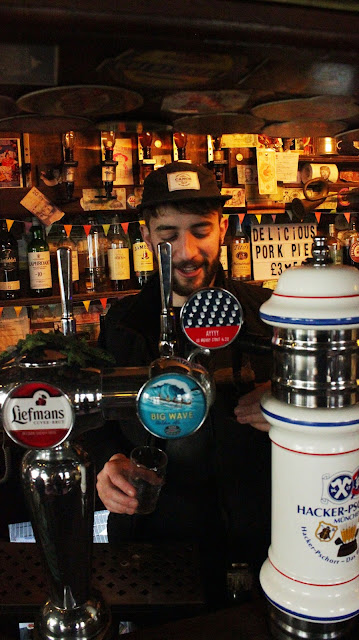 Initially, the beer brewed on the premises was exclusively sold here. Around 75% of the Hand beers are sold on the premises, but the remaining casks and kegs are sent to various bars around Brighton and the surrounding area. So whilst you don’t have to visit the Hand in Hand to try them, you really should. It’s small and well worn-in in the best way, walls covered with breweriana and ceiling beams decorated with a collection of ties snipped from the necks of punters by former landlady Brenda as a reminder that they were no longer at work. On my afternoon visit, there’s a warm community spirit to the place; regulars pop in for tea served in dimpled half-pint mugs as well as stemmed glasses of beer. It’s one of Brighton’s most characterful pubs.

Above the door hangs a sign that reads ‘you are now entering the free state of Kemptown’. I like the sentiment, but wondered if it had any further significance. “I really don’t know,” says Jen, landlady and director. “I think it just meant “anything goes” as its Kemptown and bonkers!?” And as such, it sums up why the Hand in Hand is such a wonderful place.


My sincere thanks to Jack and Jen for their hospitality. In the interests of disclosure, I'll point out that they refused to let me pay for my beers.
Posted by Joe Tindall at 22:58 No comments: