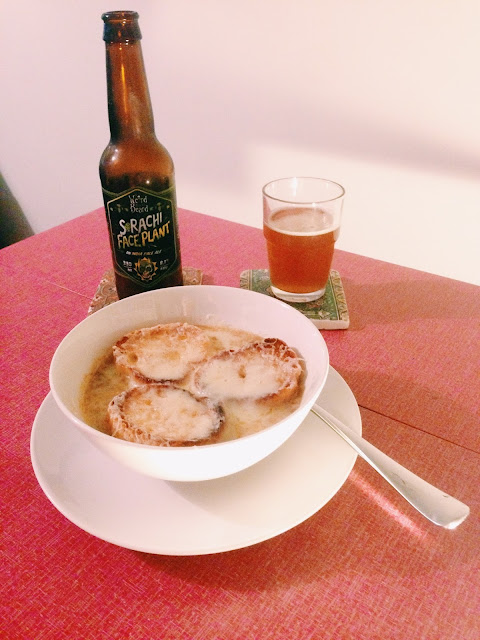 French onion soup with IPA – that was the idea that leapt into my head one afternoon, whilst daydreaming at work.  Not French onion soup accompanied by IPA – I mean with the beer in the soup, as part of the broth. There’s nothing new, of course, and as I googled the term I discovered I’m not the first to have the idea. But I did come up with a twist that I figured was worth a try – what if I was to use a single hop Sorachi Ace IPA? It’s an unusual and divisive hop that, to me, is a big burst of citrus (lemon and clementine) with a herbal edge which recalls dill. The fruitiness will match the tang of the cheese toasts which sit, oozing on top of the broth, whilst that savoury element is a natural partner for the herbs in the soup.

Beers showcasing Sorachi Ace aren't as unusual as they used to be, though they tend to stick to the saison style (the eponymous examplefrom Brooklyn Brewery, Wild Beer’s Epic Saison, or Adnams' version for Marks & Spencer – all great beers). The only beer I've come across that fits the bill is Weird Beard’s Sorachi Face Plant, so that’s what I'm using here.

As a guide, I referred to Felicity Cloake’s ‘perfect’ French onion soup recipe, making certain changes where necessary. I'm not using any cider or brandy, as I don’t want to confuse the flavour of the beer, and I'm using vegetable stock in place of beef, as I don’t eat meat. I'm also using cheddar cheese for my toasts – not very French, I know, but I love cheddar with sweet onions and I think it’s a perfect foil for hop bitterness.

The Ginger Pig, whose recipe I initially found, suggested that the chosen beer shouldn't be “too gutsy”. This is clearly not the case for the 8.6% beast I'm using. There is a lingering, boozy bitterness in the finished dish but, I would suggest, no more than there would have been had I added a nip of brandy at the last moment, as many recipes suggest. To me, it isn't too much, especially in combination with the cheese toasts, and a taste of the beer on the side pulls everything together beautifully. If you don’t want this bitterness, something like Adnams' Marks & Spencer saison, or Bristol Beer Factory’s Sorachi, a more subtle golden ale, might make a good substitute.

This recipe takes time, but it’s not labour intensive – most of the time, you can be elsewhere while the dish cooks.

Usually, I wait until I've tried five or six new brown ales and post a bulletin on my latest finds, as I did here and here. On this occasion, I thought I’d better get in quick with my thoughts on two (I think) limited edition beers whilst they’re still around. 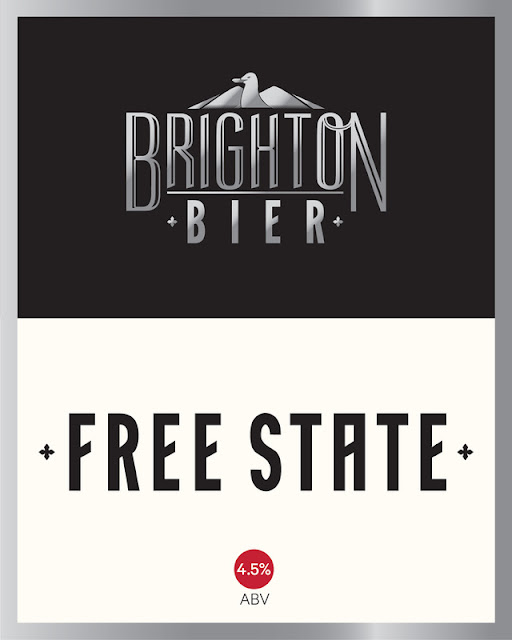 Brighton Bier Free State 21st Century Brown
Brighton Bier are having a great 2015. Having installed a brand new brewery, they’re going from strength to strength, and at this point have gotten extremely good at packing juicy hop flavour into their beers. Tasting Free State in cask conditioned form, I felt like the beer in front of me just could not possibly taste any fresher – the hops are so upfront, but at the same time, don’t smack you around the chops with bitterness. My guess, at the time, was the hop bill was a mixture of US and Southern Hemisphere hops – “something like orange and lime pith which seems like a Southern Hemisphere thing”, I wrote in a note on my phone, whilst also picking out a lychee tang that suggested Citra. I was wrong on both counts – this is a single hop beer made with Equinox, a new US variety from the same breeders that brought us Mosaic, Simcoe and the aforementioned Citra. The citrus pith thing is a kind of lingering fizzy sensation on the tongue, slightly dry and always encouraging another sip. A complex malt base brings a full, mealy body that’s pitched perfectly for my liking – not heavy going, but never feels like it’s slipping away too easily.

I do have one slight issue, though. Had I been accosted in the pub, blindfolded and asked to taste this beer without knowing what it was, I would have confidently told you it was a pale ale. It’s brown in appearance, sure, but it’s a strange experience whereby the image of the glass you’re drinking from and the taste of the beer in your mouth don’t seem to match. Maybe, once the glass has warmed a little and once I go specifically in search of it, I can detect a hint of caramel, a little chocolate. Don’t get me wrong – this is a great beer, probably the best I've tasted from this excellent brewery and one I could drink endlessly. I just like a suggestion of something dark in my brown ale. 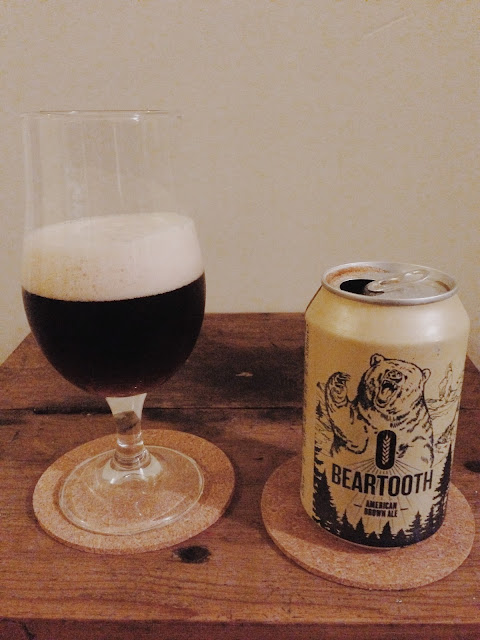 Fourpure Beartooth American Brown Ale
In one of my first posts on the subject of brown ale, I featured a seasonal from Fourpure called, simply, American Brown Ale. This beer served as a prototype for Beartooth, an improved version under a new name and in a new can. I enjoyed it a lot first time round, though my review seems to dwell on a dryness that isn't really there in the new version. It’s still bitter, but well balanced, and full of juicy hop flavour as well.

It’s a very handsome pour – dark brown, bordering on black, with a thick and creamy beige head, and an enticing aroma of fresh citrus fruits hits you immediately. The flavour is a delicate balancing act between malt and hops – there are husky, cereal-like flavours in the background, with a little roasted bitterness that brings coffee and the faintest hint of smoke. The hops, which recall grapefruit and small, sweet oranges – satsumas or tangerines - are harmonious with this malt backbone, neither element threatening to overpower the other. It’s wonderful, and you should drink it whilst you can.