In a reversal of the normal way of these things, my New Year’s resolution was to eat more ice cream. More specifically, I vowed to finally use the ice cream maker I've had in a cupboard for months and months, since I now have a freezer big enough to hold the bowl. Inevitably, it didn't take long for me to contemplate ways in which I could incorporate beer into my recipes. I came up with lots of fun ideas, some of which I’ll hopefully get round to in the coming months. My favourite, though, was an ice cream inspired by and witbier – not containing any beer, but  evoking the orange peel, coriander and spicy esters found in the style and, hopefully, complimenting those flavours when the ice cream and beer are consumed together.

The first step was to drink a wit to narrow down exactly what those flavours should be. As is well known, wit is brewed with orange peel and coriander, so these ingredients were a no-brainer. Drinking a bottle of Hoegaarden (not the most exciting example, but the only one I could easily get hold of on a whim, and actually better than I imagined it would be), I also detected hints of clove, black pepper and nutmeg and, conveniently for my ice cream recipe, a suggestion of vanilla in it’s dry, sweet finish. 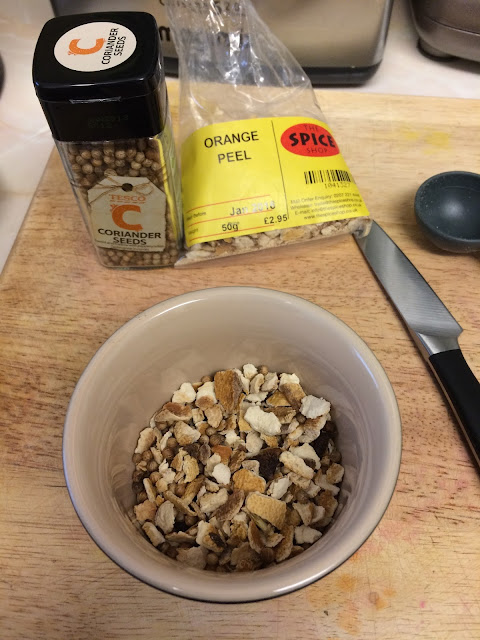 I adapted the basic vanilla recipe included in ice cream maker’s instruction manual, which involved heating 600ml of single cream until just below boiling, then removing from the heat. Next, I combined 8 egg yolks and 230g caster sugar in a mixer, then added the still-warm cream to the bowl and blended it with the sugar and eggs. This mixture is then returned to the pan, at which point I added my extra ingredients. These were as follows;
I heated this mixture until steamy, then poured it into a large mixing bowl and added 600ml whipping cream and a pinch of salt. Leaving the spices and orange peel to infuse, I covered the bowl and left it to chill, transferring it to the fridge once it was cold and leaving it overnight. The next morning, I passed the mixture through a sieve, which removed the extra ingredients but retained the specks of vanilla caviar, and added it to the pre-frozen bowl of my ice cream maker and churned for about 20 minutes before scooping into containers and placing in the freezer.


The resulting ice cream is delicious. The orange and coriander flavours don’t jump from the bowl – you could use more if you wanted, but I like the fact that, as with witbier itself, these flavours are subtle. The vanilla is clean-tasting and fresh, far preferable to the synthetic essence recommended in the recipe, and the spice and orange peel brings a slightly floral, perfumed edge and a toastiness that recalls marshmallows. 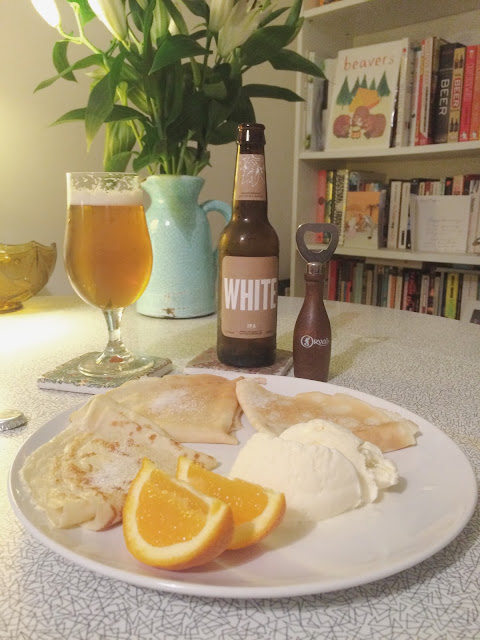 Since it was ready just in time for pancake day, I decided to try some crepes with a tiny dusting of sugar and orange juice in place of lemon, with the ice cream served on the side. This was paired with the white IPA brewed by Adnams for Marks & Spencer, a beautiful marriage of witbier and IPA. It's hopped with what tastes to me like Sorachi Ace, which brings out the orange notes even more. The fresh orange juice livens up the ice cream, and the slightly herbal edge of the beer adds an interesting dimension. The bitter finish maybe wasn't perfect for this particular dish, but there’s a lot to like in the pairing. 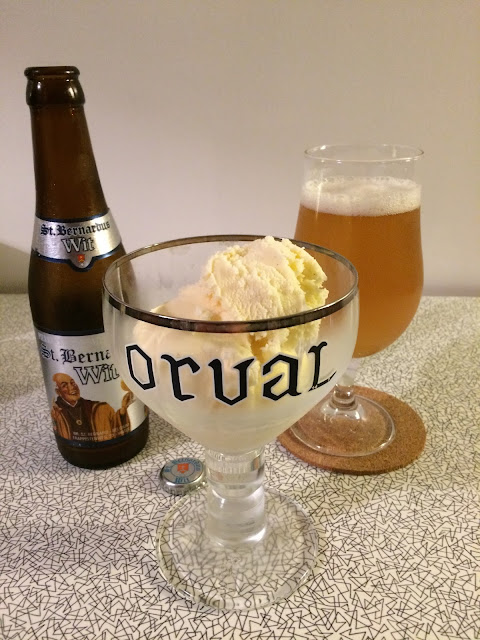 And then it was time to try the ice cream with a witbier and, although Orval obviously isn't a wit, I couldn't resist using the branded glass as a sundae dish. I chose St. Bernadus wit, which I'd never tried before - it's relatively heavy on the coriander, very strongly carbonated and has a slight metallic edge which recalls rhubarb or lemon. It works with the ice cream, though not spectacularly. The real fun began when I poured a little beer into the ice cream dish, treating the beer like the espresso in an Italian affogoto.

The coriander and orangey flavours are accentuated, as I'd hoped, but the flavours in the St. Bernadus that I wasn't expecting are actually more successful here. The lemon tang in the beer kind of reminds me of lemonade, as does the high level of fizz, and these elements conjure up ice-cream floats from childhood. The creaminess and vanilla have a suggestion of custard which marries nicely with the sharp rhubarb notes in the wit.

For my next experiment, I think some beer might make its way into the ice cream maker. I'm thinking over some ideas involving dunkelweisse, brown ale and milk stout which, depending on how successful they are, may turn up here in the coming months.
Posted by Joe Tindall at 14:55 No comments: 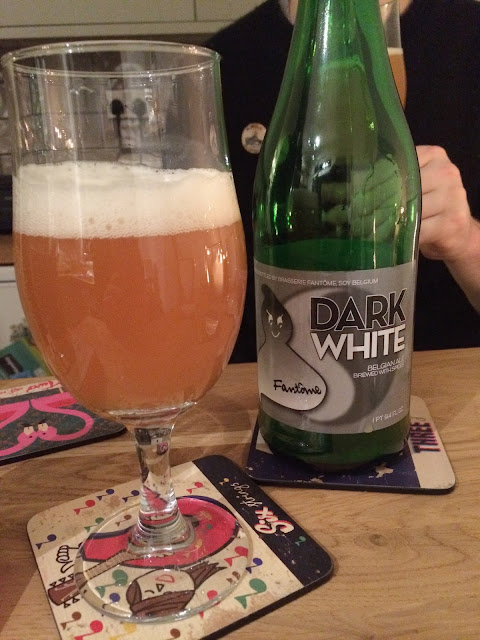 With a couple of months passing since our last meeting, this weekend was time for another informal bottle share. Here's what we popped open.

First up was one of my contributions, Dark White from Brasserie Fantôme. There's something appealingly mysterious about Fantôme - the bizarre, amateurish branding somehow draws me in, for one thing. There's the use of unusual ingredients - dandelions, for example, or a green tea which produces a beer that looks like a mad scientist's potion. The brewery's reputation is intriguingly patchy, too - Fantôme have their fanatic followers, but even these seem happy to use adjectives like "rough" and "dirty" to describe the beers. Those who are less keen seem to suggest that brewer Dany Prignon carelessly throws together his recipes with little thought as to what works and what doesn't.

Personally, this is my first taste of Fantôme - billed as a saison with spices, it appears to be brewed with black pepper. It pours a murky orange, possibly as a result of spending time in a suitcase as my Dad and brother brought it home from Brussels for me - it's had plenty of time to settle since, and there were no noticeable pieces of sediment floating around, but few pictures online look anything like as soupy as mine. The substantial white head is lively and fluffy and it has a strong nose of boiled orange sweets and farmyard funk. There are more oranges in the taste, along with oregano and pepper. The addition of pepper is deftly judged - it could easily be overdone, but rather than washing out the other flavours, it accentuates that classic saison dryness, combining with a lingering, zesty fruitiness in a quenching, bitter finish. Carbonation is surprisingly low here - I often think of brisk carbonation as a key feature in a saison, but this is a defining example of the style even without the bracing fizz. It's beautiful, and I'll be seeking out more Fantôme on the strength of Dark White.

Next was Samuel Smith's Yorkshire Stingo, a strong ale aged in oak casks that, if anything, seems to drink beyond it's 8% ABV. It's almost still, and we're not able to produce much of a head on our glasses, both factors contributing to the spirit-like nature of the beer - it does, at times, feel like something that should be sipped in small measures from a chunky tumbler. There's lots of treacle and toffee going on, along with raisins, some faint vanilla and an oaky depth from the barrel. Though it isn't as viscous or sticky as beers like this can be, the booziness is a little overwhelming - although bottle conditioned for a year before release, I'd be interested to see if another couple of years might pull it together. 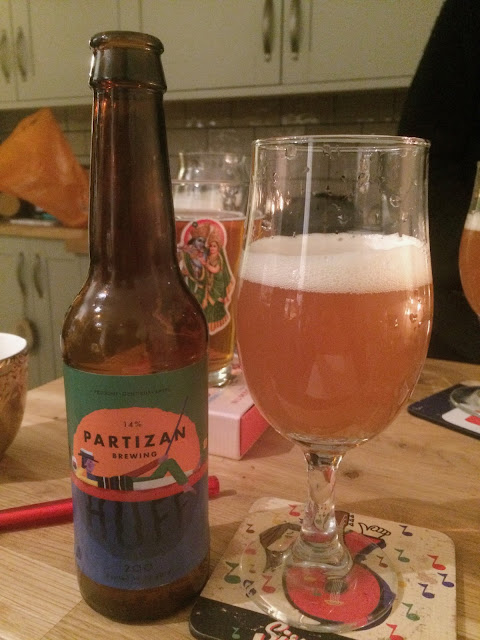 Partizan Huff followed. A mysterious beer in that the label gives no indication as to style or any other information beyond the eye-popping 14% ABV. It is, in fact, a recreation of a particular ale brewed at Winchester College, which you can read more about here. Although a government laboratory analysed the beer, giving Partizan some guidelines as to what they hoped to achieve, I doubt the historical huff would have tasted much like this. Amongst others, a saison yeast has been used to simulate the original beer's dryness. The resulting character is strongly Belgian, not unlike the Fantôme saison, or leaning towards a strong tripel. The stated aim to highlight hop aroma whilst keeping bitterness low is certainly achieved, and there's an earthy hop background complimenting the flavours of candied orange peel and candy floss. Tasty as it is, it's a little hot, and would probably be more enjoyable at about half its strength.

Whilst the others shared a Kernel export porter and something from Innis and Gunn which was apparently reduced to pennies in a supermarket, I switched to water and concentrated on banishing an attack of hiccups. Another successful bottle share - though I'll be eating a more substantial meal before we start next time.