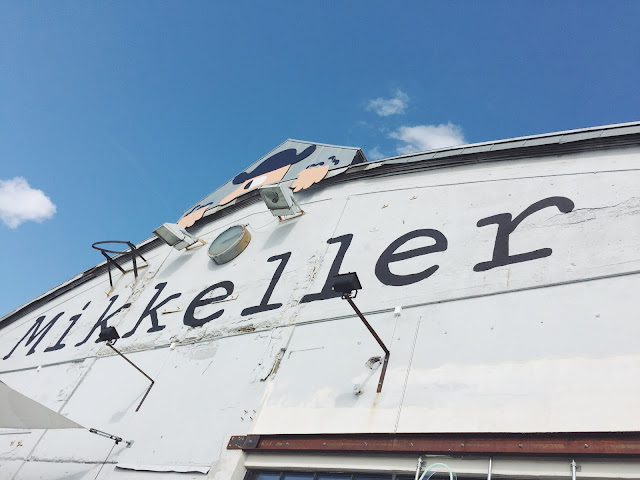 At one point, I wasn’t planning to blog about my trip to Copenhagen. I felt like I was always reading about the city, especially in the wake of the annual Beer Celebration festival, and that anything I wrote would just be noise. But when I came to compile a list of bars to visit, I realised that that wasn’t actually true. Beyond the multiple Mikkeller-operated venues, I didn’t know anything about beer in Copenhagen beyond (accurate) reports of eye-watering prices. So, here's what I found.

Carlsberg’s dominance is immediately apparent, as the airport is swamped with adverts for the stuff. Most cafés and bars seem to offer only that or Tuborg, and one of the world-class restaurants I was lucky enough to dine at had nothing more exciting than their mediocre Jacobsen sub-brand. Plan ahead, though, and Copenhagen’s astonishing beer scene reveals itself. What follows is far from comprehensive — the number of intriguing bars was so high that I actually felt anxious about not being able to visit enough of them in the time I had. If you’re visiting, my advice is to hire a bike. Copenhagen is flat with cycle lanes all across the city, and whilst it’s not such a big place, some of the beer spots are a little far out by other modes of transport. 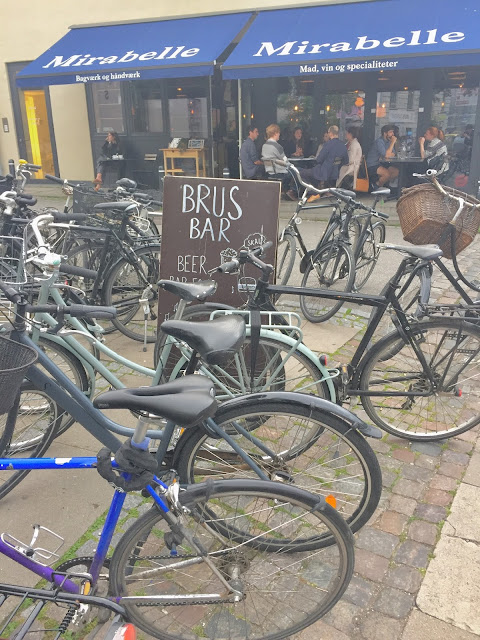 My first stop was BRUS, a brewpub in the trendy Nørrebro area run by the To Øl brand. It’s a large, clean space in a former factory, with a dedicated restaurant area (the food was excellent) and adjacent bottleshop. As you might expect, the interior is remarkably clean, sparse and stylish as per the Scandinavian fashion. However, it has bags of character and a buzzing atmosphere, which is sometimes missing in such self-consciously hip venues. I stuck to the house brews, although plenty of To Øl and guests were available. One Ton … of Blackberries, a generously fruited sour, was a great start. Like the fruit itself, it was well balanced between sweet and sharp, and the earthy, husky flavour from the blackberry seeds added satisfying depth. Das Fruit, a double IPA, wasn’t as intensely tropical as I expected. Hazy and full bodied, its restrained juiciness included a twist of tart berry and a little pepper in the finish, and was both satisfying and interesting. Finally, a Baltic porter, Jackie Wants a Black Eye. It's a style I love and this is a great example — clean and easy-going like a dark lager, but with a big, semi-dry cocoa flavour and just a hint of warming booze. 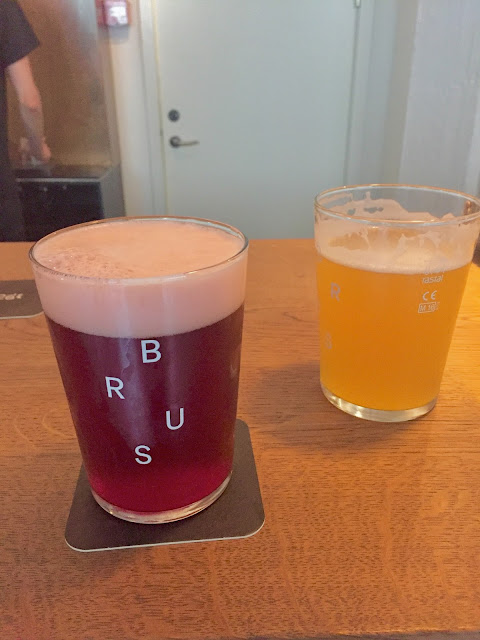 Just around the corner is another brewpub, Nørrebro Bryghus. Though named after the local area, the large space is decked out to look like a New York subway station, spreading out over two levels and proudly displaying shiny fermentation tanks. The crowd here was mostly younger, perhaps students from the nearby university, and it had a pleasant, down-to-earth atmosphere. Sadly, it was last orders soon after we arrived, so I tried just one of the beers. King’s County Brown Ale was billed as American-style, but was really a comforting festival of malt — treacly, with a little caramel and some earthy, twiggy notes, and yet finishing somewhat dry. I'd like to have spent more time here, but I had further ticks to chase. 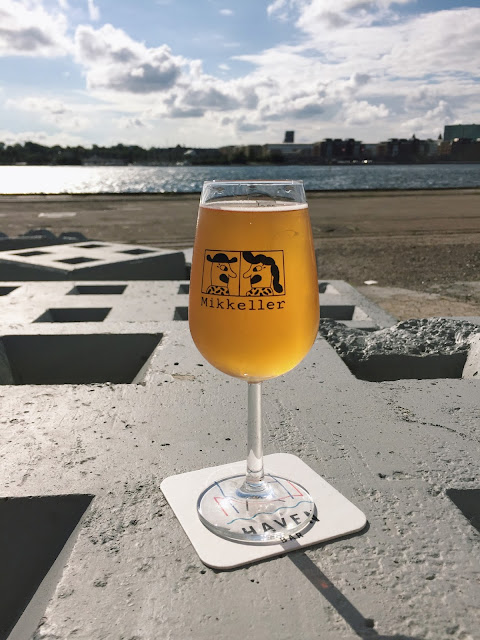 The next day, my party all went their separate ways for a couple of hours, and I took the opportunity to bomb over to Mikkeller Baghaven, the newest addition to the cuckoo brewer’s mini-empire. I didn’t necessarily mean to, but I saw a lot of the city on the way, incompetently weaving across the bike lanes, taking endless wrong turns as I unwisely tried to follow the map on my phone whilst preventing it from bouncing out of the basket. I rather like the unreconstructed industrial aesthetic of the place, and it’s a wonderful spot to sit and drink in the sunshine. Vesterbro Spontanale was my hard-earned thirst-quencher. This is the straight version of the lambic that is sold in a variety of flavoured forms, and was very impressive. Crisp, tart apple skin was the dominant flavour, followed by puckering sour lemon, just about balanced by some honeydew melon sweetness in the background. The finish is bitter like quinine, and extremely dry.

To follow, Beer Geek Riesling caught my eye. I assumed this was another in the Beer Geek series of stouts, aged in a Riesling wine barrel. Wacky stuff, and surely worth a try. Just after ordering, I said, “it’s a stout, right?” The barman looked puzzled, and replied, “no, it’s wine.” I was just about to say “I know Riesling is a wine, but…” when the penny dropped — no beer involved at all. “How does that work?” I asked. “I mean, how is Mikkeller involved?” He shrugged, and his colleague chipped in “He just wanted to make wine. It’s made in Germany. We call it a collaboration…” Perhaps ‘commission’ might be a more honest word, but since I’m trying to be more open-minded about wine anyway, I decided to give it a shot. The aroma is wheaty, with a hint of barnyard, as funky as any Bretted saison. Perhaps as a consequence of following the Spontanale, it was intensely sweet at first, like a too-strong glass of elderflower cordial. This mellowed as I drunk on, and some dry tannins emerged before a lightly acidic finish. It was delicious, and not something I’d normally have tried, so cheers to Mikkel for that one. 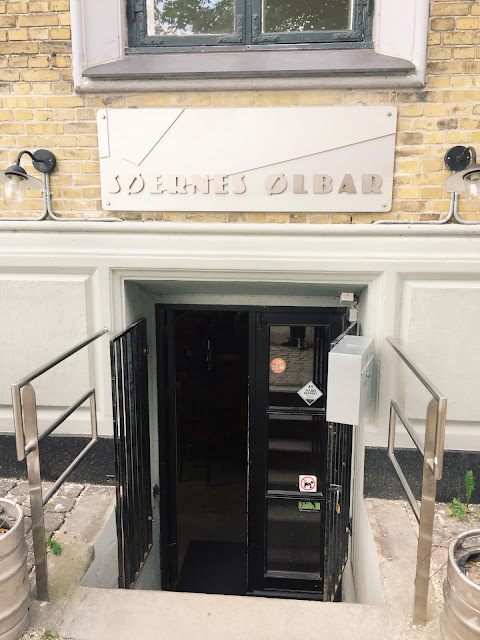 Contrasting the sparse, open spaces of Mikkeller and BRUS, Søernes Ølbar is so unassuming from the outside that I initially cycled right past it. Situated on the edge of one of Nørrebro's lakes, it has a small, cosy inside space and tables by the water. Though the beer list is long and impressive, only a few taps are Danish, of which I chose To Øl's Mochaccino Messiah, a brown ale. More than mocha, this reminded me of tiramisu, with sweet milky coffee leaning towards hazelnut complimented by dry, bitter cocoa flavours rather than the rich, deep chocolate I'd expected. It would make a great desert beer. Søernes could form part of a mini-Nørrebro crawl along with BRUS and the Bryghus but if, like me, you prefer to drink local when travelling, you may not want to linger too long here.

My final stop was Fermentoren, a tip I picked up from this Good Beer Hunting article and sought out based on the vibe-heavy candelight and lack of (fellow) tourists. As it happened, I found myself in the old meat-packing district during daylight hours, but the indoor space was still pretty dim in a bohemian rather than dingy way. The beer list here is truly world-class, and if I wasn't so hell-bent on sticking to Danish brews, I'd have been sorely tempted by the offer of Schlenkerla Urbock or Rodenbach Caractére Rouge. Instead, I plumped for New Slang, a New England-style IPA from Gamma. Although demonstrating the pillowy mouthfeel typical of the style, New Slang is less milkshake-thick than some, which made for easy, thirst-quenching drinking. The flavour is pure sticky tangerine, perhaps a little on the sweet side but far from cloying, and there's little bitterness to speak of. Whilst I'm a confirmed NEIPA fan, there are undoubtedly examples which use hazy appearance to disguise inattentive brewing and muddied, indistinct hop character. New Slang demonstrates that clarity of flavour is crucial in even the most opaque of beers. I loved it. 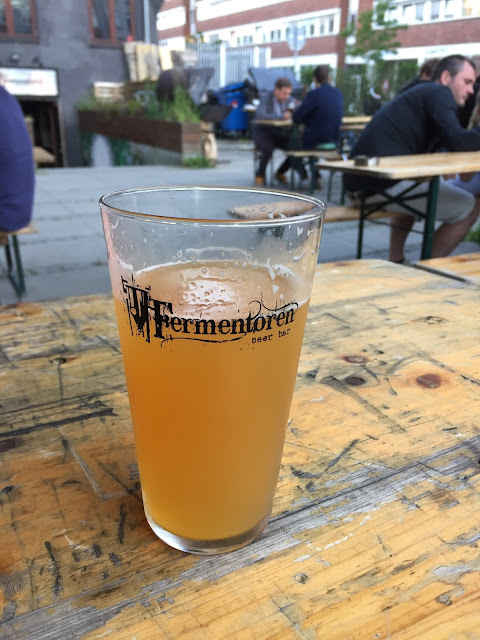 I managed to squeeze all of these venues into just a few days on what was not primarily a beer-focused trip, based on minimal forward planning. You could stay in Copenhagen for weeks and still not make it round all the beer spots, perhaps bankrupting yourself in the process. It's one of the most exciting beer cities I've visited, all the more impressive given the apparent dominance of macro lager.

For more tales from Copenhagen, I recommend the series of posts on Martin's blog starting here. He made it to lots of interesting places that I didn't and even tracked down a pint of cask Harvey's Best...!
Posted by Joe Tindall at 13:25 2 comments: