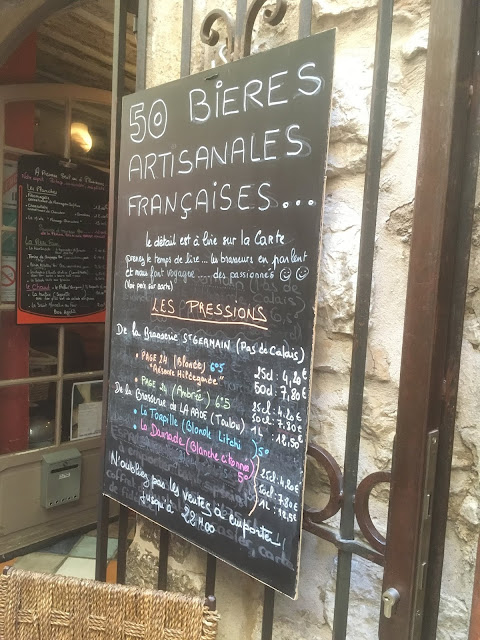 There are more breweries in France than in neighbouring Belgium. Putting aside the obvious fact that its a far larger country, you may be surprised by this statement - I certainly was when I first read it in Jeff Alworth's The Beer Bible. Belgium is internationally renowned for its beer; for the uniqueness, tradition and attention to detail its best examples represent. France is known for wine.

The binary opposition between grape and grain is, admittedly, too simplistic. Italy is dominated by wine, and a wildly inventive beer culture emerged there precisely because of this fact. In France, though, beer is both widely undervalued and restricted by a small handful of recognised styles. Most French beer is lager. Many others are variations on the biére de garde tradition - blonde, ambrée, brune - with the occasional blanche, much like a Belgian witbier, thrown in for good measure. Characterful beer from independent but industrial breweries is cheap and easy to find in supermarkets, but Heineken seems to have a firm grip on most bars.

The south of France, withdrawn from the brewing tradition in the North, is a particularly unpromising destination for beer, and you could be forgiven for forgetting it altogether and conceding to the delicious local rosé. But there are rumblings. Nice now has two branches of Beer District, a specialist beer bar serving French craft and imports - sadly I was unable to visit, but their existence is a huge development in a city that is otherwise largely indifferent to beer.

Nice, too, is home to the functionally-named Brasserie Artisinale de Nice. At a glance, their core range is unimaginative, consisting as it does of a blonde, ambrée and blanche. However, each of these is given a subtle but interesting twist - grains of paradise and chickpeas form part of the grist for the blonde, whilst the ambrée is hopped with Cascade. Lukewarm responses from Boak and Bailey and The Beer Nut a couple of years ago suggest a recent improvement in quality control, because all three of these beers were clean, well-made and vastly exceeded my expectations. The fairly straight-up blanche was the best of the bunch for me, but the sticky tropical notes of the blonde were certainly a welcome surprise. 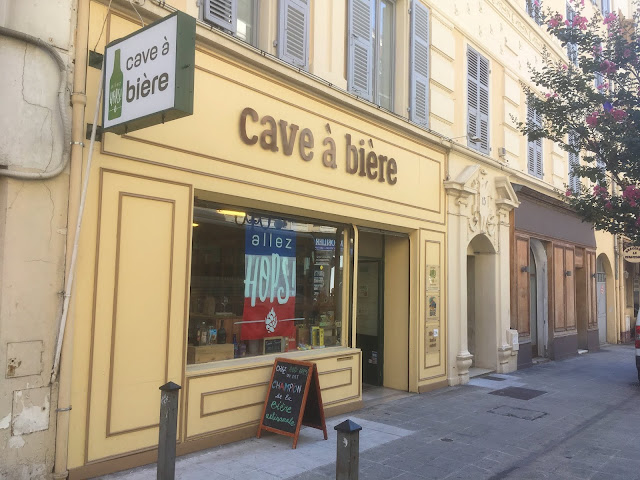 In Nice you'll also find the Allez Hops! bottleshop (or, in the more poetic French term cave á biére), which looks as though it's opened fairly recently. There are plenty of US, Belgian and British imports here, but also a great selection from beers from all over France, many of which stray far beyond the typical conservative styles and into official 'craft' territory.

The New England IPA from Brasserie Popihn in Vaumort was the highlight of my selections - not as straightforwardly juicy as some examples of the style, it's balanced with zesty lime and grapefruit, some minty and pine resin notes and a moderately bitter finish. I also loved La Débuache's Cognac Barrel. The brewery is in Angoulěme in the Charente region, near Cognac; this area is strewn with vineyards growing grapes for the famous brandy named after that town. The beer is a strong ambrée aged, obviously enough, in a cognac barrel. I love this idea, which is progressive whilst expressing a sense of place. It's malt-driven and faintly spicy in that woody, aromatic way, with a dimension of mustiness and austere booze. 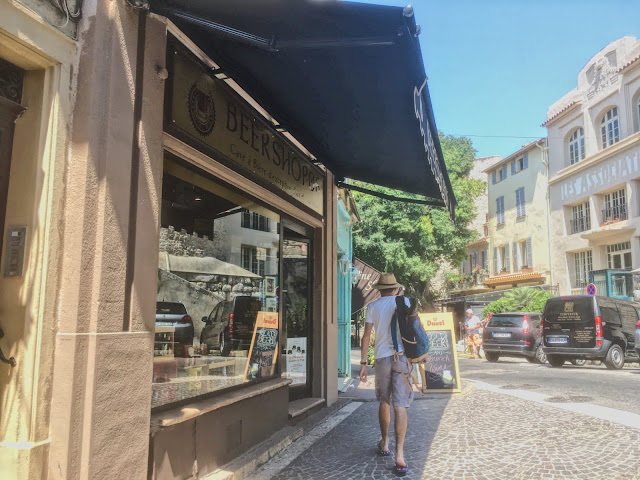 Another cave á biére awaits down the coast in Antibes. I visited this lovely town during an almost eerie lull as the locals geared up for the World Cup final, streets gradually emptying and the near-silence occasionally broken by fans driving past honking horns and shouting "allez les Bleus!" Beershop06 was cool and serene; had there been more of a buzz about the place, I'd have gladly taken advantage of the opportunity to choose a bottle from the fridge and drink it on the premises. Instead, I took a selection home, choosing relatively local brews from a selection more generally weighted towards Belgian beer.

Some specials from Brasserie Artisinale de Nice caught my eye; IPA Li Fumadi is a fairly old-school affair, with some barley sugar sweetness in the malt, stone fruit and sherbet and a bitter finish. It's made more interesting with the addition of smoked malt, used sparingly and gelling surprisingly well with the hops. Camín Lewis, an ESB with Earl Grey tea, is perfumed with oily, zesty bergamot flavours balanced by toffee malt and has a beautiful dry, tannic finish. I also want to mention Pacific Pale Ale from Colgan's, which has been on the receiving end of some savage 1-star Untappd ratings. Undeservedly so, though it drinks more like a saison than a pale ale - bone dry and vinous, with that white wine parallel boosted by white grape, lime zest and passion fruit notes. 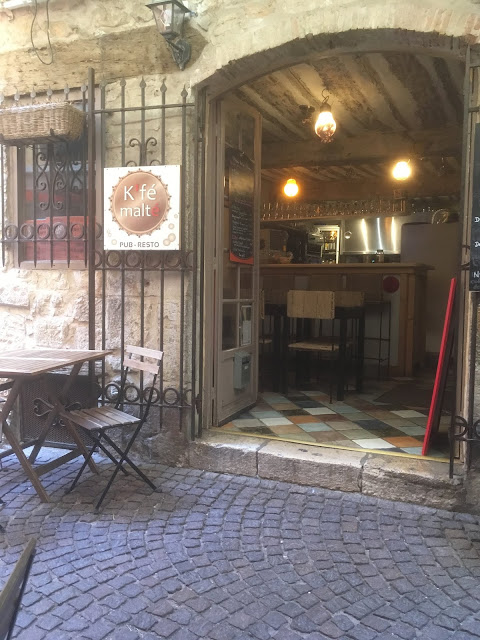 Back from the coast and nestled into the hills is Vence, a beautiful medieval town that boasts an incredible chapel designed by Matisse and the best socca you'll ever taste amongst other delights. As I prepared for a leisurely stroll into town one afternoon, I Googled the term 'craft beer Vence', not expecting much from my results. Imagine my excitement on discovering K'fé Malté. A real hole-in-the-wall place, it's nestled between a cheese shop and a butcher and seems to perform a similarly vital community role. As I sat outside, locals wandered past and chatted to the owners and, returning at peak time on a Friday evening, the place was spilling over with drinkers from all walks of life.

The beer menu is entirely French, and includes four draught beers. Á la pression, I drank Biére de la Rade's La Torpille, an aromatic and citrus-heavy session IPA with some soft lychee notes in the background. Impressed, I moved onto their stout, La Muréne, which was initially chocolatey and rich, then acrid, dry and gently bitter.

On my return visit, the menu had an extra page advertising a range of bottles from A Tribbiera, apparently Corsica's first microbrewery. I figured this was a pretty unique opportunity, so ordered APA - not, despite the name, an American pale ale, but a blonde with Corsican chestnut honey. I began to regret my decision once the beer was placed in front of me; a 500ml adorned with WordArt-esque branding printed on a sticky label, ink running with the condensation, it looked like a pretty unpromising homebrew. I remained cautious with my initial sips - although not advertised as sour, it had a definite tart edge, which made me think it might be infected. Except generally, beers that are unintentionally acidic are riddled with other off-flavours, whereas this tasted clean and precise. The tartness may even be an effect of the chestnut honey, which is musty and earthy, not particularly sweet and has a notably bitter quality. I'd grown quite fond of it by the time I'd drained the bottle.

Not all the beers I drank in France were great. Some were not even good. Several were bland. Others were really quite bad. Whilst I'm reluctant to name and shame, it's worth sounding a cautionary note lest this post come across as unrealistically positive. French craft beer is a gamble - pick a beer off the shelf at random, and off-flavours may well await. Personally, I'm willing to endure the occasional flop because the hits mentioned here were worth it. Furthermore, in seeking out craft beer in a region that doesn't really go in for it in a big way, you occasionally discover businesses like K'fé Malté and Allez Hops! The passion for beer necessary to make a go of places like this can surely warm the hearts of even the most cynical drinker.