As just about any article on the subject will tell you, Iceland’s beer culture is very young. In fact, beer over 2.25% ABV was illegal in Iceland until 1989, long after prohibition on other stronger alcoholic beverages was lifted. You’d be forgiven, then, for not making a mental connection between Iceland and beer beyond the country’s reputation for eye-wateringly expensive pints.

In recent years, though, we’ve seen Einstök beers become increasingly common in the UK, imported by James Clay. I’ve always thought that their popularity here rested on the exoticism of their Icelandic origin rather than the perfectly well-made but generally unexciting beers, but you’ll find plenty of Einstök in Reykjavik, too. I didn’t drink any – I can get them at home, and you don’t have to look too hard to find plenty of interesting alternatives.

A tip I picked up from Kaleigh’s excellent blog proved very useful – stocking up at the airport. Upon arrival at Keflavík airport, you’ll see a large duty and tax free shop which stocks a decent range of Icelandic beer in six packs. There are two good reasons to load up here – firstly, the prices are good and worked out to about £2.50 per bottle on our purchases, and secondly, buying beer in the city is not as simple as you’d expect. One of the conditions of Iceland’s uneasy relationship with beer is that normal shops can still only sell low-alcohol beers, and anything stronger must be purchased in the stated owned Vínbúdin stores. There are a couple of these in Reykjavik including one on the main shopping street, but I never once saw it open. So if you’re planning to take beers home or buy something to drink in your hotel, the airport is your best bet. There are duty free shops on the departures side that sell beer, too.

Our purchases here served as our introduction to Borg Brugghús, based in Reykjavik and common in bars and restaurants. Borg is actually a smaller enterprise within the large Ölgerðin brewery which makes Iceland’s mass-produced lager, Gull. This kind of arrangement rarely pays off in the UK but seems to be working beautifully in Borg’s case — they produce a huge range of varied, bold and ambitious beers. In bottled form we sampled Leifur, a saison brewed with arctic thyme and heather. It has a very earthy aroma and a moderately funky note in the flavour. The herbal and floral notes add some depth to the typical peppery saison characteristics, and the brisk carbonation is palate-cleansing and refreshing. Snorri, a witbier, also has artic thyme in it, which adds a delicious and satisfying depth to what can be an insipid style. 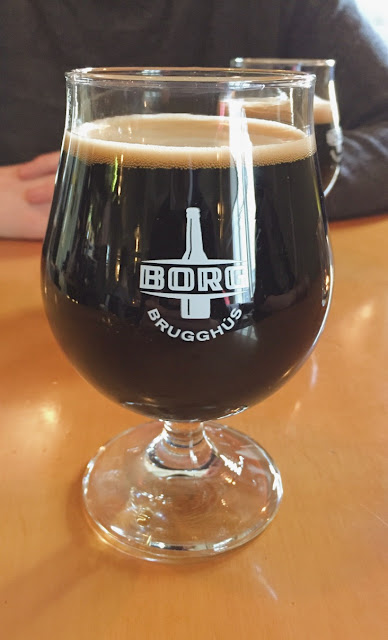 We arrived at the hotel just in time for happy hour at Uppsalir, the smart little adjacent bar. Luckily, happy hours are common in Reykjavik —  whilst I'm used to paying higher prices in craft beer bars and the prices in Iceland never made me jump out of my skin, it's certainly not cheap — and most of the craft-focused bars have them. The deal here was particularly good with two-for-one offers on draft beer, including a rotating pump dedicated to Borg. Garún, a wonderful imperial stout, was pouring on our visit — hugely rich and decadent, it was bursting with brown sugar, milk chocolate, caramel and vanilla, but also had enough of an austere booziness and a gentle acrid bitterness in the finish to balance it out. With dinner, I had Úlfur, a solid IPA with a floral hop character that reminded me of Thornbridge’s Jaipur, albeit with more of a caramel malt foundation.

Later, we headed to Kaldi, a buzzing bar operated by Bruggsmiðjan, the first microbrewery to open in Iceland in 2006, and serving only Icelandic beers. I had a few tasters of the brewery’s beers but none really appealed, so I ticked off yet another Borg offering with Úlfur Úlfur, their double IPA.  This was fantastic — although ostensibly a souped-up version of Úlfur, it was much paler, which allowed the hops to lead with deeply dank and resinous notes and lots of sticky orange. 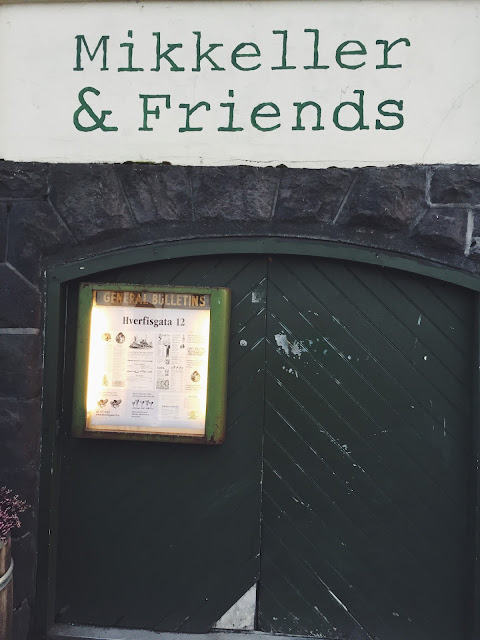 The next evening, we decided to check out Mikkeller and Friends. I like to stick to local beer when I’m travelling, but I was intrigued to visit a Mikkeller bar, and the availability of exclusive ‘house’ beers twisted my arm. Of these, I had Hverfisgata Brown, a very smooth and clean brown ale with citrus and sherbet notes alongside fresh peach and apricots. The rest of the extensive selection was largely dominated by To Øl, with more Mikkeller and a couple of Warpigs beers available, too. The bar itself was a bit too achingly hip to enjoy and felt a bit sterile and stuck-up; we only stuck around for one, although our round was free due to a problem with the card payment system! 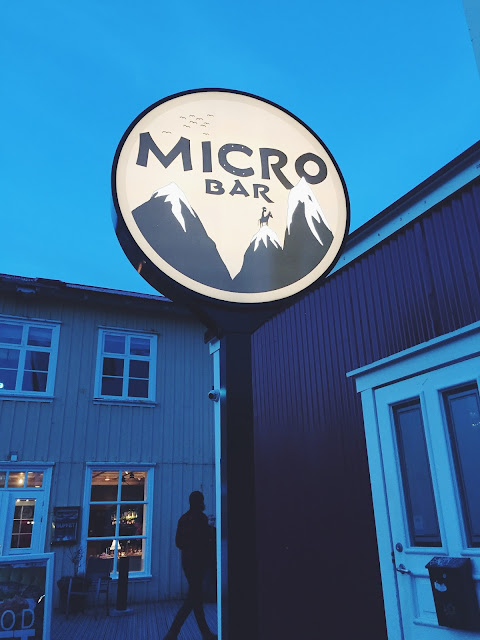 I much preferred the atmosphere at Micro Bar. Originally, the bar was situated in the Center Hotel, but has now moved to a larger, cosy basement space just across the street. All of the taps are dedicated to Icelandic beer, including a handful from the Gæðingur brewery that run the place. I opted for a tasting flight which included several of these. Hveiti is sold simply as ‘wheat beer’ and tasted more like a Belgian wit than a German weizen, with a tangy citrus finish that tasted like juicy orange flesh. Sadly, the Pale Ale that followed was ropey stuff, with a dirty, yeasty flavour that wiped out any suggestion of hops. Strange, then, that Tumi Humall, their IPA was so good, and so clean — dank pine followed by sticky mandarin and mango. After skipping the Bruggsmiðjan beers at Kaldi, I sampled their Black IPA here and, although not as hoppy as I’d expected, I really enjoyed it. It had the appropriate focus on smooth, chocolatey depth of malt flavour over aggressive roast, with a peachy hop character in the finish.

The final beer on the board was OMG Súkkulaði Porter from Ölvisholt Brugghús, based in the countryside about 45 miles outside Reykjavik. This was a slightly sweet and very rich and creamy porter, with a slight nutty quality that makes me think it may be made with oats. I came across Ölvisholt again the next day when we took a day-trip to the amazing Sólheimajökull glacier. On the way back we stopped for dinner at Hotel Anna, a lovely restaurant and hotel on a farm in the middle of nowhere. In need of sustenance and warmth after a long day of fresh air and exercise, I had some delicious vegetable soup and a bottle of Lava, Ölvisholt’s smoked imperial stout. I didn’t get a huge amount of smoke from this, and what there was seemed to fade fast as my palate adjusted. Luckily, the stout itself is fantastic – rich, warming, gently roasty and ever-so-slightly acidic, especially recalling red wine in its dry, tannic and tangy finish. 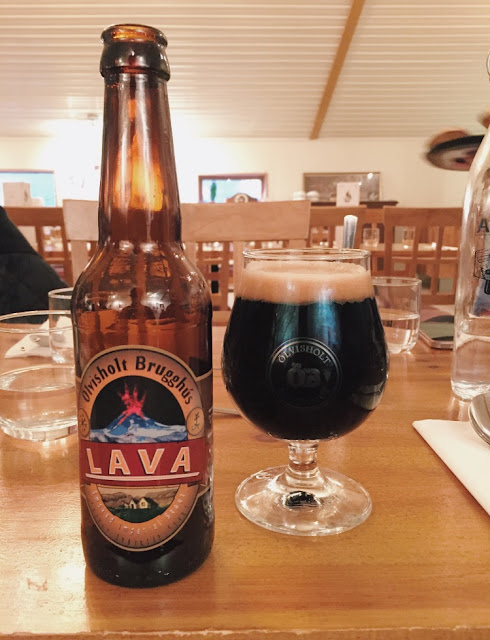 Our final destination before leaving Reykjavik was Skúli, a warm and welcoming bar in the centre of town. This was directly opposite our hotel on a courtyard, though there are no really obvious signs — I didn’t realise it was there until I looked it up on Google maps and found it was 100ft away from where I stood. Micro Bar is just down the street, and Kaldi and Mikkeller are both less than 10 minutes away — Reykjavik is very compact. Five of the taps are dedicated to Icelandic beer, mostly from Borg, with others pouring beers from the likes of Mikkeller, Founders, Stone Berlin and To Øl. To close the trip, I drank Tilraunalögun, Borg’s artic berry saison, which was an absolute treat, deftly balanced between sharp and sweet, recalling Rodenbach’s sensational Caractére Rouge. 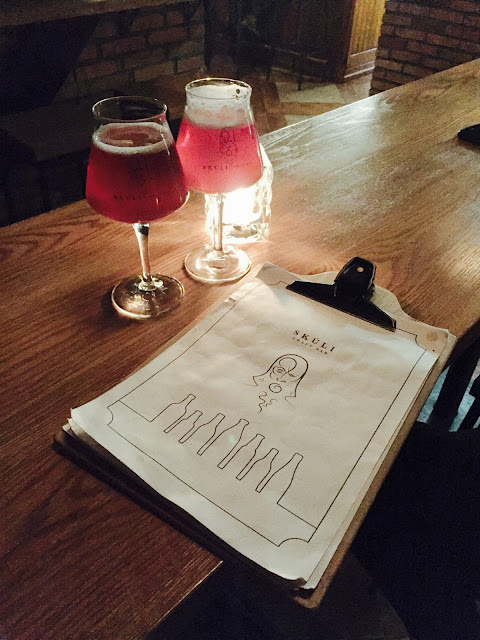 Even this isn’t the complete picture — I didn’t have time to visit Bryggjan Brugghús, a brewpub situated near Reykjavik’s marina. That such a tiny city has so much to offer beer-wise is pretty amazing, really, and though it may be hot springs, geysers and glaciers that send you Iceland, looking forward to some great beer in the evening makes any holiday better. Skál!
Posted by Joe Tindall at 07:23 No comments: