Catch up on my Lithuanian adventure in part one here and part two here.

The concept of 'craft beer' only really makes sense in a particular context. A beer like Sierra Nevada Pale Ale emerged in a marketplace almost entirely dominated by mass-produced lager; the craft beer ideology, which values independence, traditional methods and bold flavour, defined itself against that dominance.

How, then, do we understand this imported American term when applied countries with rich traditions of independent and flavoursome beer? That binary opposition - craft vs mass produced - is complicated when there is a tradition, like cask beer in the UK, that is independent and flavoursome, and yet doesn't sit entirely comfortably within widespread understandings of craft beer. And craft beer is also not necessarily tied to a place - you can travel for thousands of miles in search of local brews, and find IPAs pretty similar to those you enjoy at home.

As this article for October suggests - farmhouse beer in Lithuania is in a precarious position, some of its brightest stars facing the possibility of extinction. It would be a terrible shame to lose these unique brews and find them all replaced by double IPAs. For the time being, though, there is welcome variety on offer in Vilnius. Much as I enjoyed the esoteric traditional beers, I wouldn't want to drink them all the time. The obligatory trendy craft beer bars showcase a modern-minded brewing scene in fine fettle, and in some venues American-style craft and farmhouse styles rub shoulders.

Pluck a bottle of Genys' Tamsus Miškas from the fridges at Bambalyne and you might expect one of the distinctively Lithuanian dark beer labelled as tamsusis. What you actually get is a chocolate porter. And a very good one, too – sweet and creamy with chocolatey decadence, but with a hint of sharp dried fruit, coffee roast and earthy nuts to add complexity. Dark Forest is, I think, the barrel-aged incarnation of the same beer, and has many of the same qualities alongside a sizeable dose of vanilla and a very subtle bourbon aftertaste. I’ve plenty of time for strong, assertive barrel-aged beers, but the strength of this particular one is its subtlety. 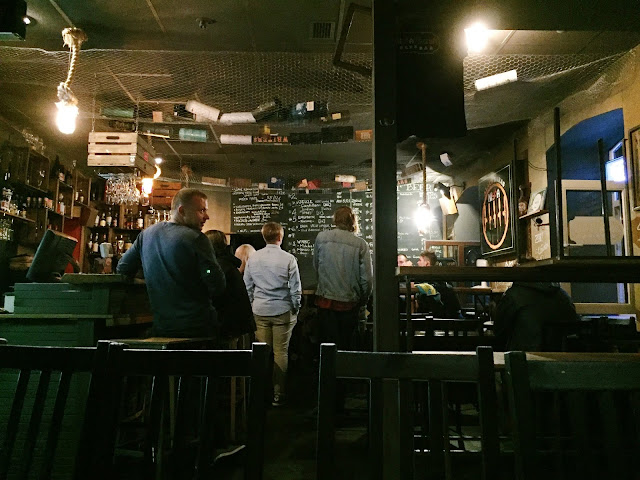 What’s in a name? The moniker Nisha Craft Capital is a statement of intent; their anniversary T-shirt that reads “it’s been 2 years since the day that Vilnius was introduced to beer” even more so. I’m happy to dismissively roll my eyes at that notion – others might be less generous. Obviously enough, there are none of your rustic kaimiškas here. Lithuanian brewers are well represented, however, but working with international styles. You don’t need to travel to Lithuania to drink a Mango Milkshake IPA, for instance, though I was especially taken with the version from Apynys. I ordered it for some silly fun, but what I got was a sophisticated take on the New England IPA – not overly sweet, and using mango almost as seasoning to boost the naturally juicy hop profile rather than as an overbearing adjunct. A grainy, lager-like note in the finish might placate those who complain that modern IPAs “don’t taste like beer.”

A less convincing take on the NEIPA is Blacklight’s Multijuice. It opens with a sharp tropical aroma, and initially tastes soapy, floral and waxy with a big lemon zest dimension. Some sticky passion fruit emerges eventually, but that’s the only concession to the expected fruit salad effect you’d expect from the style. The good news is that it is, in all other respects, a very good beer; subtle and sessionable with bright flavours that complimented a summery evening beautifully. 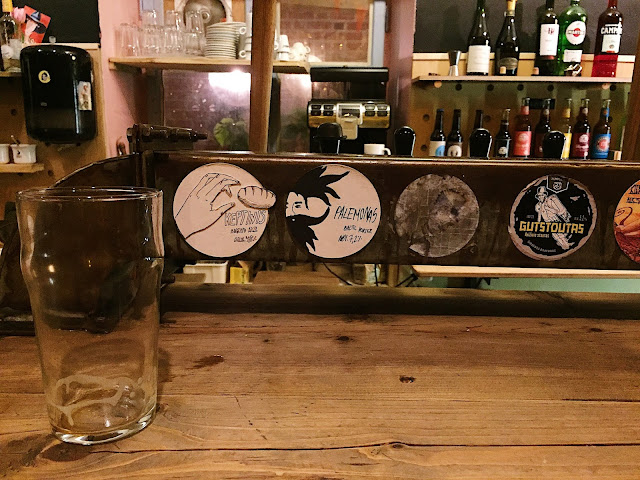 I mentioned Dundulis in my previous post, noting that whilst they’re primarily concerned with modern craft styles, they make the occasional nod to tradition. Their IPA, Humulupu, was Lithuania’s first, and it’s pretty good, though already somewhat dated with caramel malt and English-style earthy, spicy hops, finishing on a notably bitter piney note. Their beers are easily found in Vilnius, including at several branches of their own Špunka bars. I visisted Etmonų Špunka, seemingly a popular spot for attractive young people and absolutely heaving. Here I drank Gutstoutas, a sweet oatmeal stout with a tobacco-like hop profile and chocolatey depth of malt flavour. Sadly it’s also thin where it should be rich and creamy, with a touch too much buttery diacetyl and some off-putting acidity. I’d highly recommend you swing by for the ambience, and probably best stick to the IPA when you do. Just around the corner is Prohibicija, situated off a buzzing communal courtyard amongst a number of other bars and food joints. If you want a break from oddball Lithuanian styles but still want to drink local, a visit here should be your priority. The aforementioned Apynys teamed up with Russia’s Courage and Midnight Project from Belarus for 3 in 1 IPA, and it’s another clean and accomplished effort. Though crystal clear, it has much of the saturated stone fruit character you’d expect from a much hazier beer, but is much more refreshing and less intense.

Also skirting the NEIPA fruit bowl is Marakešas from Kuro Aparatūra, nominally a ‘hopfenweiss’ with the emphasis very much on the hop rather than the weiss. Alongside the tropical fruit there’s an edge of gooseberry which just verges on tartness and freshening the whole thing up like a squirt of lime on a wedge of ripe mango and finishing on a gorgeous zingy, sherbet-like note. NemieGOSEPareiGOSE, from the same brewery, was similarly impressive. Clean and sharp with a tart green apple quality, it also has a notable coriander component which gels very nicely with some pear-like esters, finishing with a perfumed, rosewater taste.

I feel no shame in admitting that after just a few days of oddball farmhouse beer, the occasional IPA really hit the spot. But I'd never take the latter at the expense of the former; after all, hopfenweisse and gose are no reason to travel to Vilnius - raw ale and keptinis are.