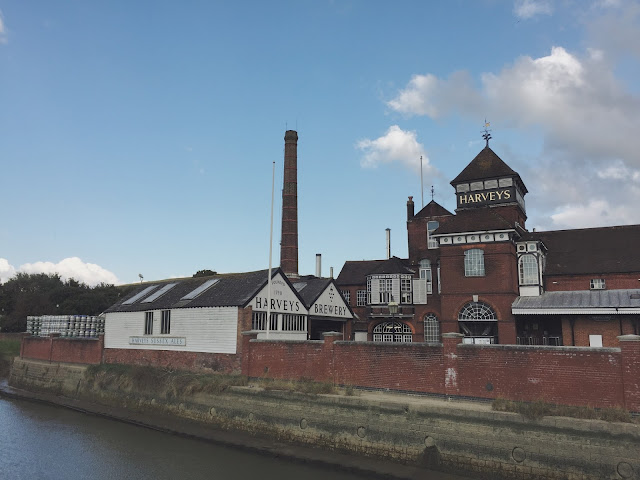 The ‘crafty’ rebrand of a traditional brewery is, at this point, a recognised phenomenon. From the addition of a hop cone to the logo that adorns Shepherd Neame’s otherwise unchanged and increasingly tired range to 'craft' sub-brand such as Thwaite's Crafty Dan, there’s an almost palpable desperation for relevance amongst national brewers of brown beer. Such efforts verge from the cynical – give an old beer a new name and funk up the typeface a little bit and bingo, craft beer – to the sincere yet misguided, with only Adnams and Fuller’s generally thought to be successfully bridging the craft/trad divide.

Harvey’s of Lewes, East Sussex, would rank amongst the breweries I’d least expect to employ a modernising makeover. Their approach is thoroughly old-school, and they persevere with such near-extinct styles as sub-3% milk stout in the Mackesons vein and brown ale coloured with caramel, both packaged in 25cl ‘nip’ bottles. And yet, at this year’s Great British Beer Festival, Harvey’s revealed a sleek new look, both updating their visual style and forging a coherent brand identity amongst their numerous seasonal releases. More astounding was the announcement of two new beers to be packaged in kegs as well as cans, and this news is accompanied by a namecheck for Beavertown and BrewDog on their website.

Alongside the snazzy new branding and newly pressurised containers comes a new slogan – “we wunt be druv”, an expression in local Sussex dialect meaning “we won’t be driven”, as if to assert that Harvey’s continue to do things on their own terms. In fairness, I should stress that they are in no way claiming to produce ‘craft’ beer, and there is a definite continuum between their existing beers and the new range. Still, there’s no denying that these new beers are targeting a new audience. Large family brewers may be flailing to recover diminishing sales, but having operated as an exclusively local brewery, Harvey’s are now making a conscious decision to extend their reach, extending their sales area beyond the current 60 mile radius.

I have slightly mixed feelings about this. In Lewes, I’ve found that even pubs who clearly aren’t focused on beer quality or choice are likely to deliver a superb pint of Sussex Best. This is because there’s an immense sense of local pride surrounding the brewery. Best is the default beer for a generation of drinkers – my brother works as a barman in Brighton and says it is common for men of a certain age to order a pint of Harvey’s without first scanning the bar to check whether it is on sale, often indignant if it isn’t available. It is a beer tied to a place – if you travel to Sussex, you might seek out Sussex Best, knowing that you’re unlikely to find it elsewhere. Increased availability may dampen that magic.

It’s also hard to gauge exactly who these kegged beers are aimed at. I can see the logic behind Golden Bier – golden ales have long been considered a potential converter for lager drinkers, and cool, carbonated keg dispense will strengthen that link. Malt Brown, however, seems misguided. Modern beer remains all about hops – perhaps, actually, it is increasingly about hops – so the focus on malt, together with the reference to that most unglamorous of colours, makes them seem a little out of touch. I can’t see existing Harvey’s fans ordering this over their cask beers, and can’t see cask sceptics ordering a beer called Malt Brown, either.

The most sensible move in this revamp is canning Sussex Best, a beer with existing cult appeal which, until now, has only been available on draught (Blue Label, a bottled beer, is ostensibly a version of Sussex Best, but doesn’t taste particularly similar to me). It pours a familiar coppery brown, with a thin white head that fizzes intensely before disappearing altogether and the aroma is carried by malt, together with just-ripe plums. The taste is, as ever, mysterious – I get a slightly different impression every time I drink Sussex Best, which isn’t to say that it frequently changes, but rather that it has an unusual flavour profile that seems to suggest different things with each pint. Recently, I’ve tended to think of tea – black, possibly with a slice of lemon – and wholemeal toast. As with several Harvey’s beers, there is the faintest suggestion of tartness – small enough that you may find you’re still debating whether it’s really there by the time your glass is drained – which adds complexity. The carbonation in the canned product is gentle, replicating a well-conditioned cask and deftly avoiding the distracting fizz which dogs many bottled and canned bitters. 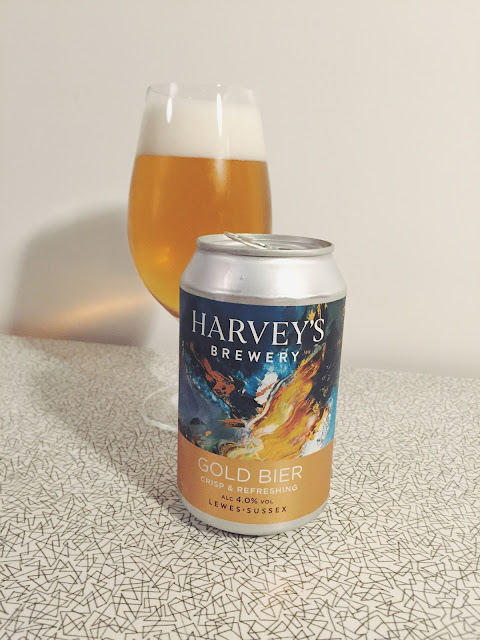 Predictably, Gold Bier is a good shade lighter and with its generous, tight head, resembles a pilsner in appearance. On the nose are cereals, but with a hint of plum which suggests a familiar yeast strain. The initial taste is underwhelming – bland and watery, though there is an edge of toasty malt and Digestive biscuits before a lemony, bitter aftertaste. This lingering bitterness sends you back for more, but each subsequent gulp is a little disappointing, bringing a kind of empty absence of flavour that recalls alcohol free lager. And yet for all that, by the time I finished the glass I realised I’d been rather enjoying it. It’s a beer that doesn’t reward analysis – it all about sessionable drinkability, and I could happily have cracked another.

Malt Brown is fairly dark, edging into stout territory save for some reddy-brown patches around the edges of the glass. It instantly reminds me of the brewery’s phenomenal porter, though without the harsh and acrid brown malt edge. Smooth milk chocolate dominates and, paired with a distinct malty tang, it recalls a malted chocolate milkshake. Surely they’re missing a trick not marketing this as a chocolate porter? 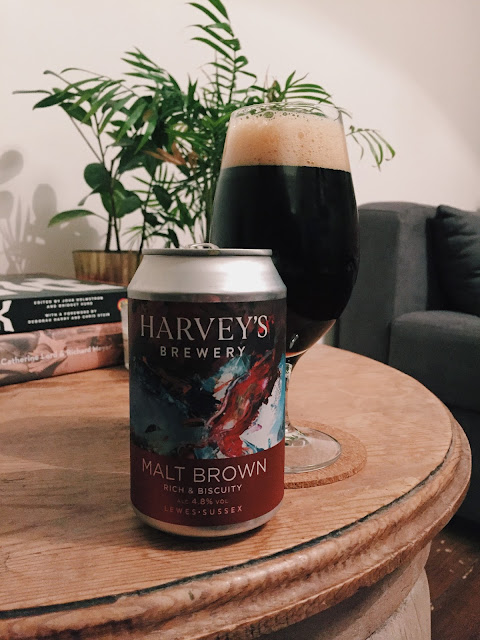 Harvey’s does have something of an image problem. Some of my craft-educated friends challenge the perception of Harvey’s as a fine brewery as received wisdom and don’t think the beers stand up to their reputation. These people can be sceptical of cask beer, but it’s not just that - but put a pint of Golden Bier, dispensed from a keg, in front of them and I don’t think they’d change their minds about Harvey’s. I’m with those who consider the likes of Sussex Best and Old Ale legitimate classics, and I don’t think a shiny keg font will ever tempt me away from these beers.
Posted by Joe Tindall at 09:51 1 comment: