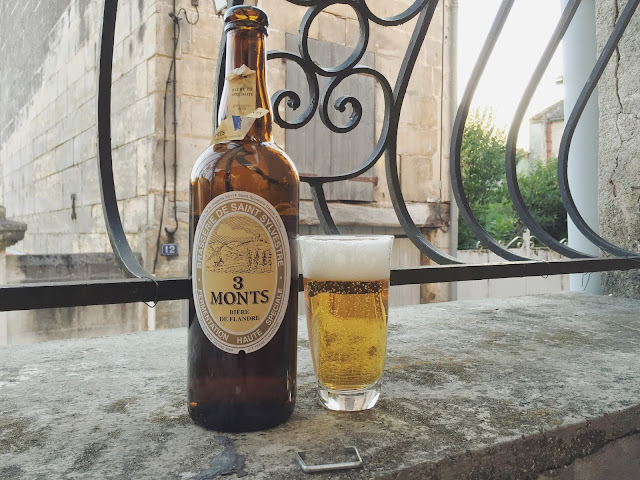 “Devotees have long regarded this style as a minor classic, and in recent years it has become more widely recognised, especially in Britain and the United States.”

Such was Michael Jackson’s introduction to biére de garde in his Beer Companion in 1993. If this resurgence in popularity really occurred, it’s hard to say how long it lasted. Some fourteen years later, K. Florian Kemp heralded a similar resurrection in an article for All About Beer. Today, though, biére de garde seems to be in a bit of a slump. Sure, your average post-Jackson beer nerd may be familiar with a couple of the classic examples, but you’ll see few contemporary takes on the style on Britain’s bars.

Biéres de garde are often grouped with saisons under the banner of ‘farmhouse ales’. Farmhouse brewing traditions extend way beyond France and Belgium — as Lars Garshol’s fascinating blog consistently demonstrates — but nevertheless, the biére de garde lives in the shadow of the saison style, and whilst the saison booms, its French cousin generates far less interest. This is understandable, in a way — if the dry, peppery quality of a saison in the Dupont vein invites dry hopping, mixed fermentation and other ‘crafty’ goings on, the soft, sweet, malty character of many biéres de garde hardly screams experimentation. However, appreciation of simple beers is a fine thing, and in my view, some examples have more complexity than they’re given credit for. If nothing else, a handsome corked bottle won’t set you back more than a few Euros in a continental supermarché and will bring far greater rewards than the green stubbies that share the shelf.

The term itself refers to a production practice more than a coherent group of beers — the name roughly translates as “beer for keeping”, and these beers were first brewed in the spring and kept for drinking throughout the summer months and harvesting season. The Second World War delivered a further blow to the already waning tradition as many breweries lost their brewing equipment when it was melted down by the occupiers.  Once artificial refrigeration made seasonal brewing obsolete and bottom-fermenting Alsatian lagers gained prominence, biére de garde all but disappeared.

In The Beer Bible, Jeff Alworth suggests that the effect of the Second World War defined modern biére de garde; as breweries recovered, they found that drinkers didn’t want the rustic, vinous farmhouse ales of old, and looked to lager brewing for inspiration. Today’s incarnations of the style are ‘kept’ in the sense that they undergo a lengthy lagering stage —longer than an average ale, not as long as what we think of as lager — which is part of what separates the style from the saisons brewed over the Belgian border. Some modern breweries have also switched to a bottom-fermenting yeast strain.

What, then, does one expect from the style? Well, it depends — biére de garde comes in blonde, ambrée and brune forms, though I have yet to encounter the latter. Michael Jackson refers to the beers as “rich and toffeeish”, with an “ale-like frutiness”, which seems mainly applicable to the ambrée beers. He also notes that “biéres de garde sometimes have a dash of cellar character, with suggestions of oak or cork”, which applies mostly to the dry, vinous blonde examples. 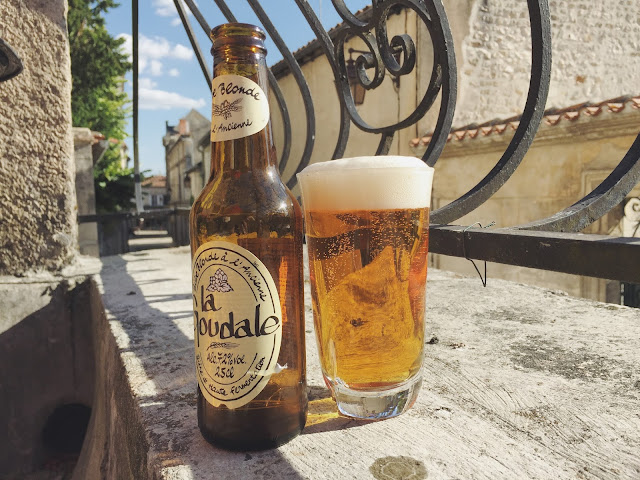 Amongst the blondes, 3 Monts (St. Sylvestre) is the most complex and by far my favourite. A pilsner malt backbone carries a gentle, semi-sweet marzipan and honey flavour before a dry finish reminiscent of white wine. This, along with brisk, palate-livening carbonation, definitely recalls a saison. Jenlain Blonde (Brasserie Dyuck) has a hint of barnyard in the aroma, and similarly has marzipan along with a crisp, lager-like malt flavour. There’s a dry, vinous finish here, too, with a bitterness that’s gentle but lingers nevertheless.  La Goudale (Brasseurs de Gayant) is brewed with orange peel and coriander (and, less attractively, rice), but doesn’t exactly come off like a witbier. It’s closer to shandy, its pale malt base merging with an elderflower-like sweetness and a citrusy tang. The bitter finish builds, and is actually quite significant for a beer of this style. It’s a great refresher in the sun, but one that must be handled with care since its 7.2% ABV is not remotely evident in the taste. Ch’Ti Blonde (Castelain) is very sweet, and lacks the dry and bitter finish in these other beers. I don’t like it much. 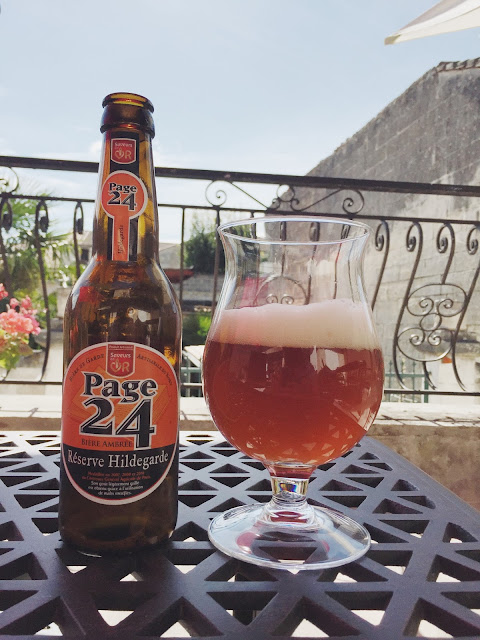 Ambrée versions of the style have more of a history, however. Brasserie Dyuck was the brewery that revived the biére de garde in the 1970 as their distinctive champagne-style, crowned and corked bottles became popular with students in Lille (their blonde was only introduced in 2005). Their Jenlain Ambrée is probably the closest thing to a style-defining benchmark. It is a heavily malt-forward beer, not a million miles away from an English bitter, except with very little balancing hop character. Its character principally suggests marzipan and vanilla along with tangy citrus fruits. Ch’Ti Ambrée is very similar, whilst La Goudale Ambrée is notable for introducing some faint banana esters. Page 24 Reserve Hildegarde (Brasserie Saint Germain) is from a smaller, perhaps more artisanal brewery. It’s the only bottle-conditioned beer amongst all these examples and perhaps as a result has bolder flavours than most beers of the style. Although the recipe doesn’t contain candi sugar, there’s a definite note of candy floss or cinder toffee, and it is faintly earthy and spicy. The finish brings a citrusy snap recalling a good, hoppy pilsner.

Within France, too, there are certain beers mixing the biére de garde tradition with outside influences. The highly regarded Etoile du Nord (Thiriez) resembles dry, highly attenuated saisons and, unlike most biéres de garde, has a notable hop profile thanks to large additions of Kentish Brambling Cross. Bellerose Biére Blonde Extra (Brasserie des Sources) sells itself as a meeting of biére de garde and IPA, which is a bit much — it doesn’t have anything even close to the hop character of an IPA, but there is a peppery spice before a finish far bitterer than most beers of the style. This bitterness isn’t enough to balance what is a strikingly sweet beer, like a sticky, sugary iced bun. 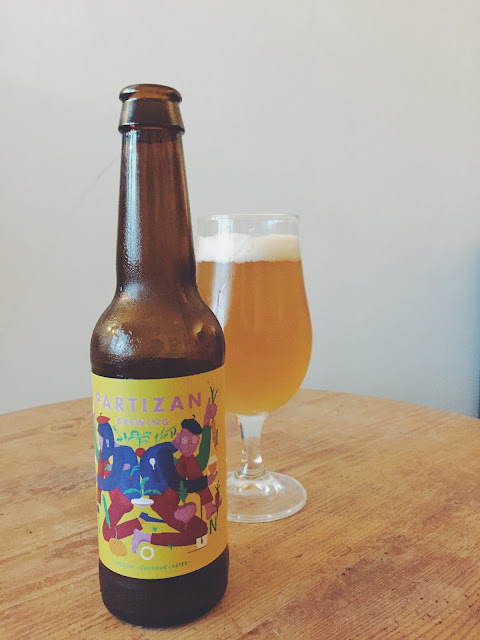 As I have already suggested, biére de garde isn’t often seen in the UK, but modern breweries will occasionally produce their own interpretations. My first taste of the style was the eponymous example from Thornbridge, which was later re-brewed as Jehanne. As I recall, this was a sweet, malty ambrée with a strong marzipan note. In a slightly curmudgeonly blog post, Thornbridge brewmaster Rob Lovatt suggested that this beer would have sold better if it had been labelled as a saison, the latter being the more ‘fashionable’ style. This seems to be Parizan’s strategy with their Biére de Garde Triskel, which is labelled as a saison first and a biére de garde in much smaller letters. This is actually an accurate representation of the beer, which leans towards the Belgian style with just a little French influence. It’s full of orange blossom and apricot with some phenolic pepper and clove flavours, and has an exceedingly crisp, dry, vinous finish. The Triskel hops, an Anglo-French hybrid, may be responsible for the grassy, herbal notes, but this is a firmly yeast-driven beer. I wouldn’t recommend it to those wishing to understand the biére de garde, but I would recommend it to fans of delicious beer.

More experimental was Brigid Fire from the currently dormant Celt Experience. This was a smoked rye IPA brewed with biére de garde yeast, a bonkers recipe that almost seemed to have all its elements picked at random. It didn’t wholly work, partly because that yeast overpowered everything else, dominating with toffee, almond and honey flavours.  Also in an inventive vain is a red wine barrel aged edition of Olde Garde, a biére de garde brewed by Cloudwater in collaboration with Burning Sky. I haven’t been lucky enough to try either the original beer or its barrel aged incarnation, but I am pleased to see modern British breweries take an interesting approach to an under-utilised style. In the past few years, we’ve seen impossibly obscure styles blow up in the craft beer world, the rise of the gose being the most obvious example. Perhaps, then, the biére de garde will have its moment in the sun.
Posted by Joe Tindall at 01:05