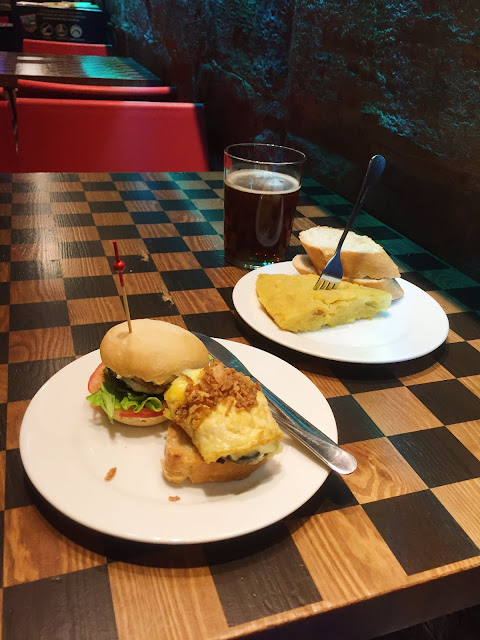 There’s a resinous quality to the air on Goienkale, in Bilbao’s old town. Shops selling studded belts, Dr. Martens and Dead Boys records give this street a certain vibe – like Camden, but not trying so hard – which is completed by the groups of scruffy but friendly-looking young punks crouching outside the bars. The dank aromas might be something to do with them.

When I first visited Bilbao, aged around 14, my main priority was seeking out cheap Ramones CDs. That mission quite likely took me to this part of town, though I can’t really remember. It was probably the gently edgy feel to the place that made me fall in love with the city – it was one of the first places my parents took me on holiday that I actively enjoyed, rather than passively being dragged around between plates of chips and glasses of Coke in continental cafes.

Priorities changes, of course. There seems to be a punk show on at a squatted building down the road; but I’m more interested in wolfing down vegan pinxtos, the Basque equivalent of tapas, in a couple of the local bars. My introduction to Basque beer comes at Tirauki, where a selection of bottled beers displayed on the bar offer a welcome diversion from the Heineken brands on tap. From these, I opt for Pink Porter from local outfit La Txika de la Cerveza. I'm a little taken aback at first, not expecting vanilla and dark sugar that suggest rum ‘n’ raisin ice cream. Served cold and being relatively light of body, this hits a sweet spot between refreshing and interesting. 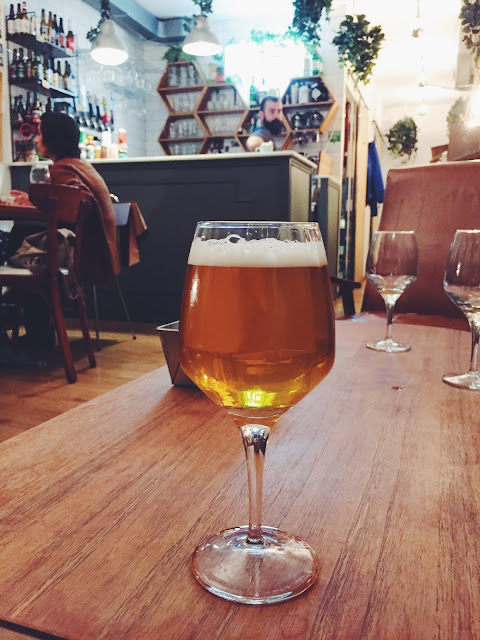 Moving out of the old town and crossing the river, I head for Café Bihotz. This place is intimate, but very cool in a minimalist, Scandinavian fashion like a hipster coffee shop – which, by day at least, is what it is; in the evening, candles are lit and beer pours from six draught lines. Initially bypassing these, I get stuck into the menu of bottles and cans, starting with Zapaburu from Basque brewery Laugar. Billed a hazy IPA but not especially murky, it has a sticky tropical mandarin edge, balanced with a touch of dankness. Dumbstruck from Jakobsland, a little further afield in Santiago de Compostela, is an ode to Citra hops, bursting with juicy lychee.

Of the draught beers, I plump for the local option -  Basqueland’s Brut Reynolds. Obviously enough, it’s brut IPA, a zeitgeist style at the moment and one I happen to be keen on. Like the best examples, this has a real precision and clarity of flavour, boosted by a very dry and bitter finish. I struggle all the way through the glass to put my finger on the dominant flavour – my best attempt is citrus zest and cannabis, with an earthy pine sap quality. On the way home, in a misplaced effort at sophistication, I stop at a cocktail bar and order almost blindly from a menu written in Spanish. I curse my monoglottism when a mango smoothie-style drink arrives in a milk bottle with a striped paper straw. I mention it because it was accompanied by a sprig of fresh oregano; chew on a leaf and sip the mango puree and the flavour sensation uncannily recalls the IPA from earlier in the evening. 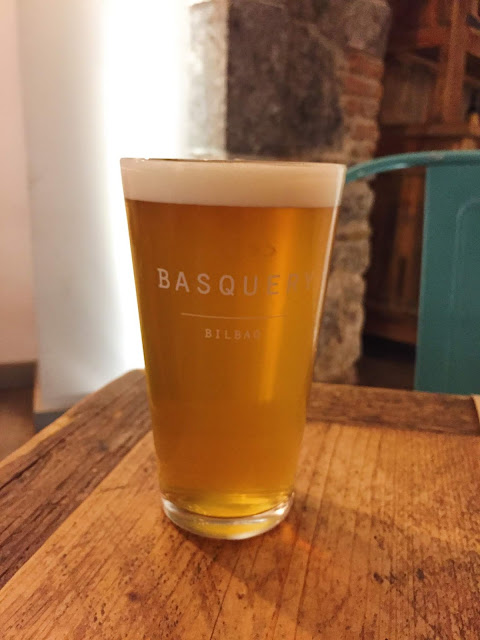 The principal rationale for choosing Bilbao as a destination was the Guggenheim museum, somewhere I definitely did not appreciate on my previous visit as a teenager. It’s sensational, obviously, but a lengthy wander through its galleries builds up a significant hunger and thirst; Basquery is the answer. Though listed on Ratebeer and other sites as a brewpub, it looks to me more like a full-size production brewery with a deli, bakery and restaurant attached. The staff, initially bamboozled by my presence (I think I was maybe slightly early for full lunch service and this was the source of confusion, but I can’t be sure) valiantly overcome a significant language barrier to sort me out with a nice lunch and some impressive beers.

Itsasbeer is a saison incorporating grape must from a local winemaker specialising in the beautifully dry and acidic Basque white, txaokoli.  I’ll admit to being a sucker for almost any beer that straddles the boundary between grape and grain, but there’s something particularly wonderful about the crisp, tannic quality of white grapes in a saison; a gently floral air rounds it out and a dry, peppery finish almost demands another swig. Hitman, an IPA, is less distinctive, but very good, recalling that same mango/oregano interplay I’d found over at Bihotz the previous evening.


An audible buzz of conversation hit me from halfway down the street as I approached Singular. The place is bustling, seemingly fulfilling an important community function as a place for locals to meet for beer and pinxtos. The tap list is short but well curated and boosted by a decent selection of bottles and cans. I choose another from Basqueland, Aupa, and settle down with my book. I’m distracted first by the beer, which has an austere blood orange bitterness about it and a remarkable cleanliness. Then there’s the general ambience of the place, the people-watching potential, and the delightful old beagle scampering about. Before long I’ve put the book down, deciding I need no further stimulation than the beer in my glass and the ambience of the room. 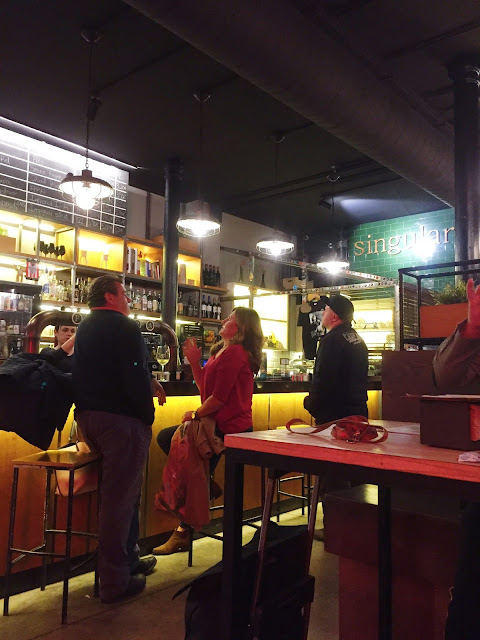 A can of Salda Badago from the unfortunately-named Gross brewery in San Sebastien follows. The flavour is oddly nostalgic – it tastes exactly like Barratt’s Fruit Salad chews. The key elements here are pineapple and vanilla, but there’s a more grown-up edge of sharp tropical fruit and a notable bitterness in the finish. To finish, a small glass of Aupa Tovarisch, from the aforementioned Laugar (‘aupa’, by the way, is apparently a Basque expression meaning something analogous to ‘cheers’). This is a complex imperial stout that I initially find hard work, such is its intensity – my notes read “I will probably feel very pissed by the time I’ve finished this (very small) glass.” A rounded coffee depth of flavour props up notes of maple syrup, orange oil and gingerbread, finishing on a port wine tang. After a good 45 minutes of slow sipping, I decide its excellent and leave before I can be tempted by another. 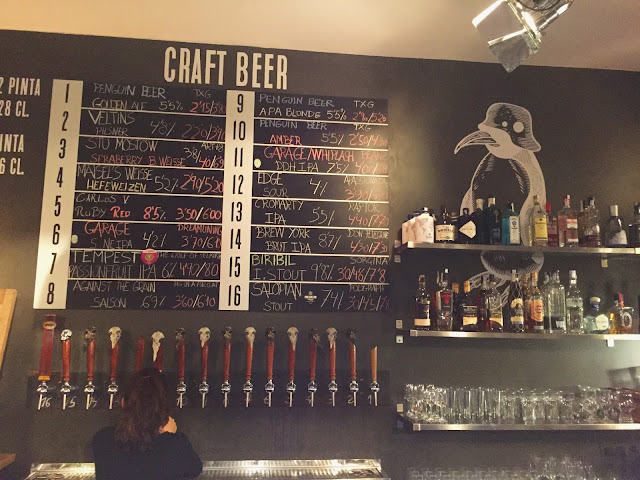 Penguin Bar has a somewhat familiar feel; with a minimal, faintly industrial vibe and 16-strong tap list chalked on the walk, it's in the mould of craft beer bars in major cities the world over. Personally, I don’t hold that against the place; it's atmospheric with a young, hip crowd amongst whom I obviously feel right at home. There are several house beers, and its not easy to ascertain who brews these – some sources suggest it’s Txorierri Garagardoak, based just outside the city in Sondika. APA Blonde eases me in, and it’s a solid West Coast pale ale with a resinous, piney quality rounded out by some stone fruit.

To follow, I catch up with a couple of Barcelona breweries. I’m excited to reacquaint myself with Appasionada from Barcelona’s Edge, but I'm let down as its vibrant passion fruit aroma is muddied with buttery diacetyl. Beanz, a double IPA brewed in collaboration between Garage Brewing and Ireland’s Whiplash, is straight-up bizarre. I’m taken aback by its distinctly Middle Eastern vibe, which primarily recalls mint tea but with a musty quality redolent of saffron. Tropical fruit lurks underneath, sure, but I’m astonished to look it up and find that it doesn’t contain any kind of wacky adjunct ingredient. Perhaps this is what happens to New England IPAs when the savoury, caraway-type flavours almost completely take over? It’s interesting to begin with, but soon becomes difficult to drink.

Barcelona might be the more obviously fruitful location for beer, but on this evening in Penguin Bar, the Basque country easily has the edge. I’m aware that I end almost every travel post on this blog by saying something along the lines of ‘city X might not be an obvious beer location, but if you’re going anyway, there’s good stuff to be found.” Having spotted this trend, I should now resist it, but the truth is it applies perfectly to Bilbao. The dedicated ticker, such as myself, will gain satisfaction from the fact that the city’s beer locations can all be visited over the course of a weekend. There may be a couple of duds along the way – the worst Spanish beers can be really bad in my experience - but that’s tolerable. And at the very worst, I can heartily recommend sitting with a one-Euro tin of Mahou on the edge of the Nervión river in the sun.